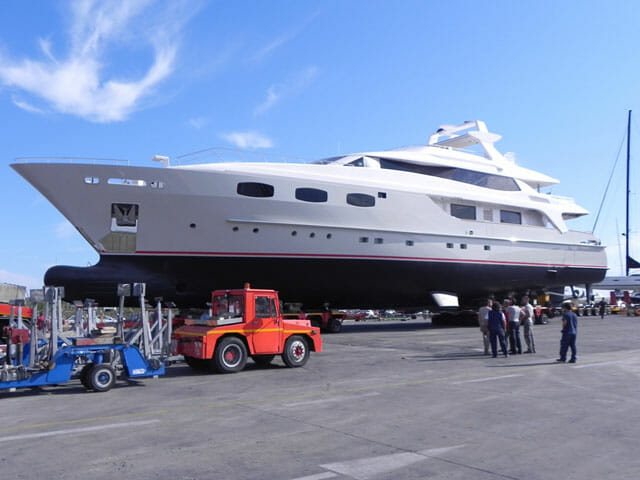 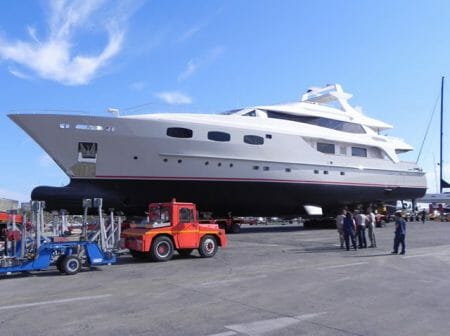 The 40-meter range has been good for Baglietto. Proof: Its latest megayacht, Why Worry, is its seventh displacement yacht in the Baglietto 43 displacement-yacht series.

Because of the financial difficulties of Baglietto’s parent company, Why Worry was moved to Rossi Navi shipyard, but she continues to be completed by Baglietto craftsmen. Measuring 42.75 meters (140 feet), Why Worry bears styling by Francesco Paszkowski and is similar in appearance to other Baglietto 43s, such as Ancora, Apache II, and Natori.

Inside, Why Worry has accommodations for 12 in five staterooms (three double cabins and two twins). Should additional family or friends join a cruise, the bridge-deck study converts to an extra cabin. A crew of seven caters to everyone’s needs, whether they’re watching a movie on the 52-inch saloon TV, a same-size TV in the skylounge, or soaking in the on-deck Jacuzzi.

A modern decor envelops every inch of the 8.9-meter (29-foot) beam. It was created by SA Aranha & Vasconselos, a Portuguese design firm known for high-end residential work. With the owner’s input, the designers employed wenge wood, alabaster that’s backlit, and stainless steel.

Caterpillar power should push the all-aluminum Why Worry to a top speed of 16.5 knots and a cruise speed of 13 knots. In addition, the megayacht is ABS classed and meets the MCA Code for safety.