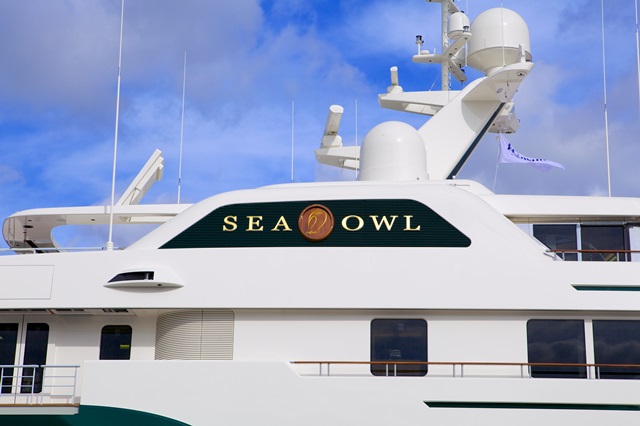 Experienced owners who enjoy cruising as much as their young family does are weeks away from taking delivery of Sea Owl, the 203’5” (62-meter) megayacht which launched late last week at Feadship’s Royal Van Lent yard for her first series of sea trials.

Sea Owl has the same color pattern outside as the owners’ previous megayachts. The most recent of those yachts measured 142 feet (43.3 meters), built by Burger Boat Company. Styling is by Andrew Winch Designs, which also contributed to the previous Sea Owl. Aboard the Feadship, the design firm used extensive amounts of varnished wood outside (below) to complement the color scheme. The studio also worked with the owners on the megayacht’s incredibly complex and detailed interior. Sea Owl’s owners want images and full details kept confidential for now. Suffice it to say that they requested an extraordinary amount of carved wood—done by hand, of course. There are also abundant sculptures and stonework. The complexity and detail even extends to the security system aboard Sea Owl, which Feadship and the owners’ representatives say is the most elaborate one created for a yacht to their knowledge. 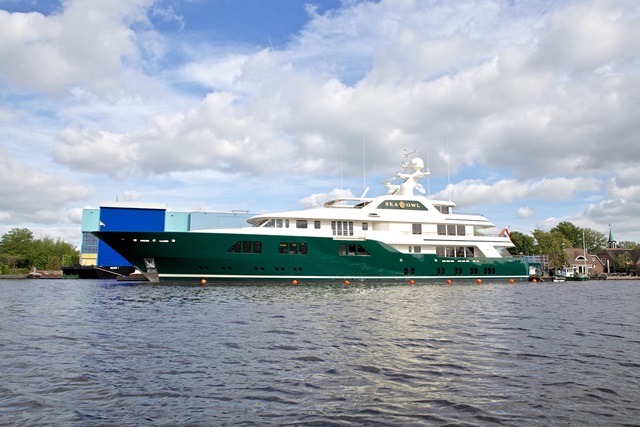 Sea Owl, with a 12’2” (3.70-meter) beam, has a highly personalized general arrangement, too. Rather than have guest staterooms solely for adults, there are two kids’ cabins accompanying three staterooms for the grown-up set. There’s also a nanny cabin. As much as the yacht reflects the owners’ vision, the kids may get the better end of the deal. A variety of toys and games as well as cabin decors tailored to their delights await.

A crew of 18 will soon join Capt. John Watson, who has spent the past year at Royal Van Lent seeing Sea Owl take shape. Watson says it’s been “an enlightening and extraordinarily professional experience.” He cites the “family atmosphere” at Feadship and craftsmen who have worked there for years, even decades. Watson adds that the owners have thoroughly enjoyed the process as well.