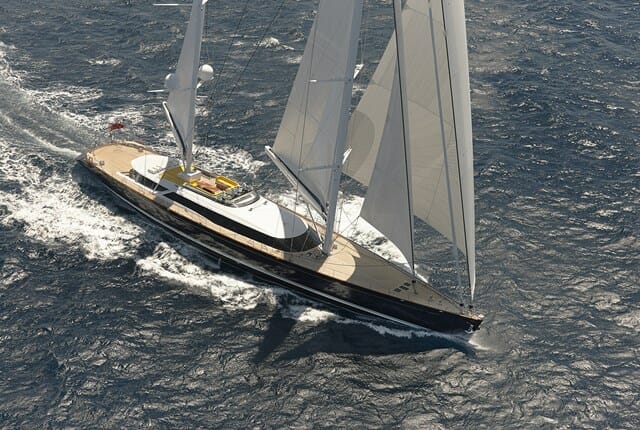 Here are the first photos of Mondango 3 on sea trials. The 185-foot (56.4-meter), all-aluminum ketch will be delivered by Alloy Yachts later this month. Mondango 3 is the successor to a 170-foot (52-meter) ketch, also named Mondango, delivered by the New Zealand-based yard in 2008.

Since these photos were taken when Mondango 3 was on her first series of sea trials, she wasn’t sailing full out. However, she was reportedly cruising at 14 to 15 knots. Whatever speeds the owners enjoy after delivery, they’ll have varying cruising options at hand. That’s because Dubois Naval Architects designed Mondango 3 with a swing-down centerboard. It improves upwind performance and lets the sailing superyacht access somewhat shallow harbors. (Draft ranges from 13 to 36 feet, or 4 to 11 meters, due to that centerboard.)

The 36-foot (11-meter) beam should translate to comfortable spaces inside and out aboard Mondango 3. The owners and guests will surely spend a lot of time on the 646-square-foot (60-square-meter) flying bridge. They’ll also have two tenders, stowed in a below-decks garage, at their disposal. Guests are being accommodated in two queen staterooms and two twin cabins, one having a pullman.