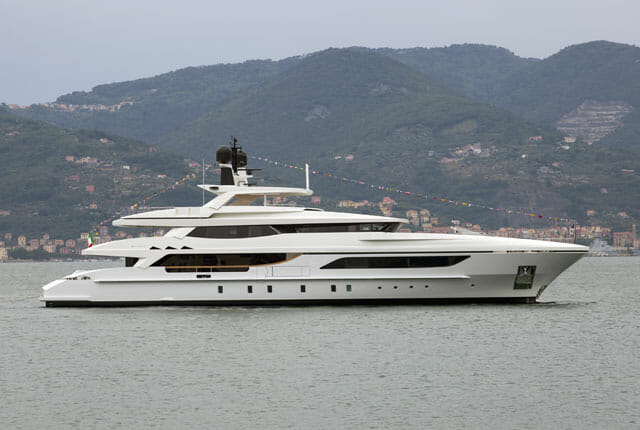 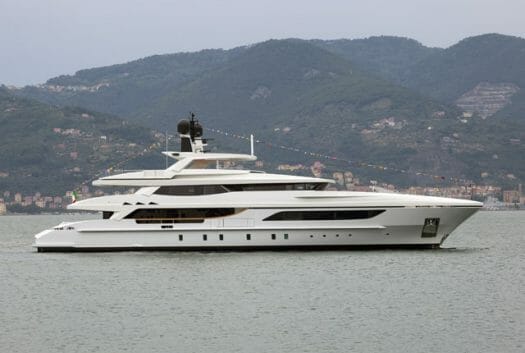 Headed to the Cannes Yachting Festival or Monaco Yacht Show in September? If so, you’ll get a chance to see this Baglietto 46-meter (150’9”). The megayacht, the first of a new displacement series created by the Italian shipyard, launched last week.

The builder tapped Francesco Paszkowski for styling and interior design. Margherita Casprini, who often collaborates with Paszkowski’s studio, also contributed to the interior. Finishing touches are still being applied to it. However, this Baglieto 46-meter should prove to be a visual feast. A juxtaposition of dark and light tones appears throughout the interior. So, too, do elements of minimalism and the natural world.

The owners and guests (10 people total) should spend a good deal of time outside. When the Baglietto 46-meter is at anchor, an 18-foot (5.5-meter) tender can take them to shore. The tender and a rescue boat are both stowed in the foredeck. That’s because a 269-square-foot (25-square-meter) beach club is fully aft.

The Baglietto 46-meter series is intended for a 12-knot cruise and 17-knot top speed with Caterpillar power. She should also see a 4,500-nautical-mile-range at 12 knots.

Baglietto is keeping most other details about this project close to the vest. It does, however, plan to publicize a few more projects come boat-show time. All were created in conjunction with Paszkowski. Two are planing yachts, and two are displacement yachts. The latter include a 55- and 62-meter (180- and 203-footers, respectively). The planing yachts are 35, 43, and 46 meters (about 115, 141, and 151 feet, respectively). Furthermore, Baglietto plans to keep its MV range in the public eye. At last year’s Cannes show, the builder exhibited the MV13. She’s an all-aluminum speedboat incorporating a military-vessel hull design from Baglietto’s heritage, mixed with a luxury-yacht layout and outfitting.

In the meantime, another Bagiletto 46-meter is under construction for completion early next year.