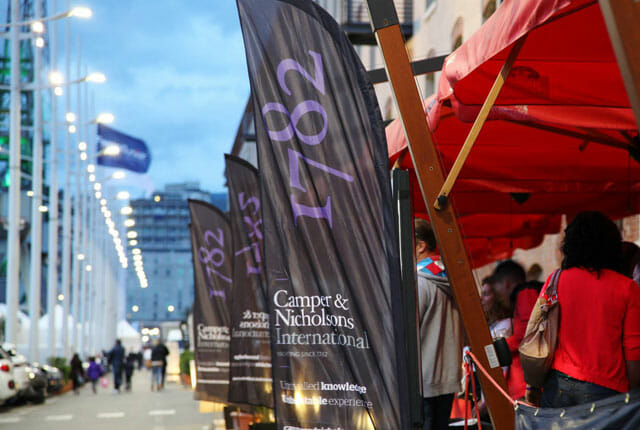 UPDATE, AUGUST 19, 2014: Camper & Nicholsons released its first commentary on its acquisition yesterday. It confirmed that Colosseum Services is the new owner. The statement reads,“ The transaction was originated by Brook Hazelton, former CEO of Phillips, the international art auction house, and Eric de Saintdo, ex-CEO of Camper & Nicholsons International and of the Festival International de la Plaisance (now Cannes Yachting Festival). In early 2014, based on their personal relationship, they partnered with Colosseum Services in order to secure the financial backing necessary to complete the acquisition and provide the resources enabling the company to enhance its leadership position at the forefront of the yachting industry.”

According to multiple published reports, the Tribunal de Commerce de Cannes, a commercial court, ordered the proceedings on July 22. It fully liquidated one subsidiary, SNP Boat Service, since no buyer emerged. Established in 1972, SNP Boat Service built and sold yachts and megayachts. Camper & Nicholsons was sold to Colosseum Services, a Swiss luxury-goods company, according to Reuters and other media. Reuters reports the price was €1 million. Camper & Nicholsons has not released any comment as of press time.

SAS G. Rodriguez, a maintenance yard in France, also sold. The total was €2 million, according to several reports. The same reports name two joint buyers. One is the Dutch-based Industrial Marine and Diesels. The other is Claus Johansen, who manages Chantier Naval de l’Esterel off Cannes.

Financial troubles for Rodriguez Group date back several years. In 2008, it reported a loss of €47.6 million (about $64.4 million at the time). In early 2009, it opted for Safeguard, a French insolvency regime. Safeguard permits a company to continue operating and to withhold paying outstanding liabilities until it works out a repayment schedule with banks. Despite operational restructuring in 2010 and 2013, however, Rodriguez Group continued to have problems. SNP Boat Service had debts of €115 million at the end of 2013. As a result, this past January, the Tribunal de Commerce de Cannes started insolvency proceedings for Rodriguez Group and SNP Boat Service. (Note that Camper & Nicholsons was not named in these proceedings.) The two companies were granted a renewable six-month observation period, during which each could try to reach a new agreement with creditors. In June, Rodriguez Group stated its net loss for the first half of 2013-2014 totaled €44 million. Media reports quote the commercial court as indicating all Rodriguez Group debt amounted to €96.5 million when the liquidation was ordered.

The debt difficulties took its toll on Rodriguez Group stock, since it was a publicly traded company until last month. Shares were last listed at €0.90 per share.