You are here: Home / Builders / Crescent Custom Yachts Back in Business

The new owner of the British Columbia-based builder is Tim Charles. Crescent, initially known as Crescent Beach Boatbuilders, was established in 1988 by his grandfather, Jack Charles. Charles, a Canadian businessman, got involved in the yacht business after taking delivery of his second, and largest, fully custom yacht. She was a 115-footer (35-meter) christened Hotei, delivered in 1986 by McQueen’s Boatworks. Charles got Crescent started by acquiring hulls from American yards and completing the yachts on spec. Crescent went on to build on a custom basis, delivering all-fiberglass megayachts to about 123 feet (37.6 meters) throughout the 1990s. It ceased production in 2004, though, partly due to the then-weakening U.S. dollar in comparison to the Canadian dollar. Investors acquired the name from Jack Charles in 2005 and moved production to the site of another British Columbia builder they had previously acquired, namely Queenship. Work began on a 144 trideck under the Crescent name in the late 2000s, but stopped in 2011 due to the buyer reportedly defaulting on payments. Crescent ceased all operations once again in 2012, due to the reported default and lack of other contracts.

Tim Charles is not solely tied to yachting via his grandfather. When Crescent was sold to the investment group, he created Platinum Marine to refit and repair a variety of vessels. Still active today, it operates on the original site of Crescent Custom Yachts. Interesting enough, Platinum Marine was a strategic partner of Crescent in the early 2000s, too, performing lamination work, among other things. Many of Platinum’s employees even worked at Crescent before the takeover. 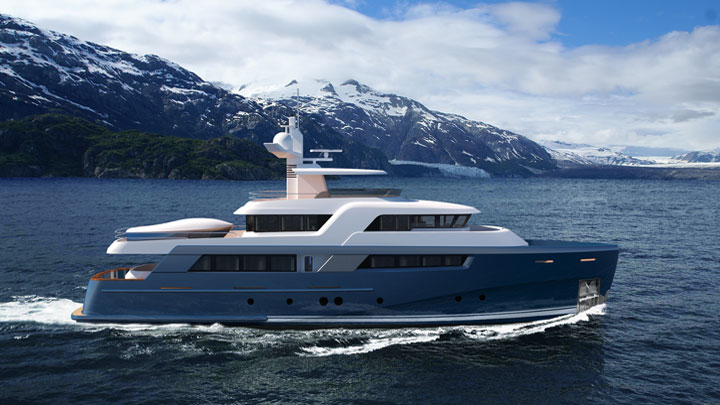 “I saw an opportunity to bring Crescent Custom Yachts back to life by utilizing the capabilities of our exceptional craftsmen,” he says. “Crescent is a collaboration of the talents of these people and others who have worked at some of B.C.’s best shipbuilders, such as Rayburn Yachts, McQueen Yachts, Richmond Yachts, Queenship, and West Bay Yachts. We are fortunate to have the best craftsmen available in the Pacific Northwest, and it will show in our projects.”

Among those projects are the Crescent 145 pictured at top. She’s set for launch late this year. Styling is by Jonathan Quinn Barnett, on behalf of an American owner. She’ll be classed under Lloyd’s. Another American commissioned the Crescent 110 pictured above, with styling by Luiz de Basto Designs. What makes the 110 particularly noteworthy is her aluminum construction. She marks the first-ever metal Crescent.

Crescent Custom Yachts has yet another megayacht from Jonathan Quinn Barnett available for a buyer. She’s a 115, with expedition-inspired looks and whose hull is at the yard. And, a 155 is in the initial stages of planning with the yard. The designer has not been divulged. However, similar to the 110, she is to be built in aluminum.