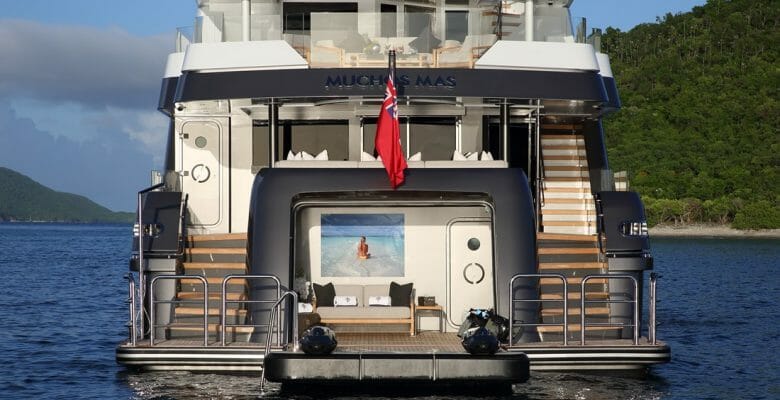 Talk about a comeback. Crescent Custom Yachts’ Muchos Mas was not only one of the highlights of the Fort Lauderdale show, but also marked the return of a storied Canadian builder. In 2015, after Tim Charles acquired the brand his grandfather launched 30 years earlier, the company began completing the 144-foot (44 meter) Muchos Mas. The superyacht had begun for another owner, but when the project ran into financial troubles, an American couple rescued her, with a bolder design. Guided by Seattle designer Jonathan Quinn Barnett, who designed both the interior and exterior, the new owners opted for significant modifications without changing the hull and infrastructure. “These folks were in no way absentee owners,” notes Scott Hay, Crescent’s general manager. “They were very involved throughout the project.” 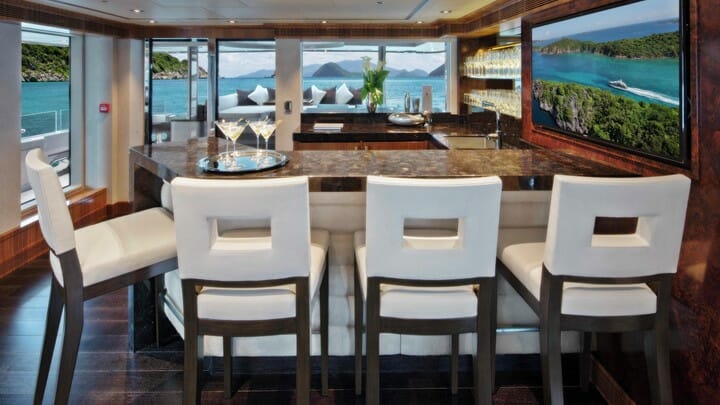 Muchos Mas’ owners certainly have a great eye for details, while JQB’s creative modifications shine. In the saloon, a generous marble bar with white barstools sits aft, in proximity to a drop-down window. This allows free movement between the interior and exterior. A large lounge near the bar, along with formal dining forward for 10, keep the atmosphere social. 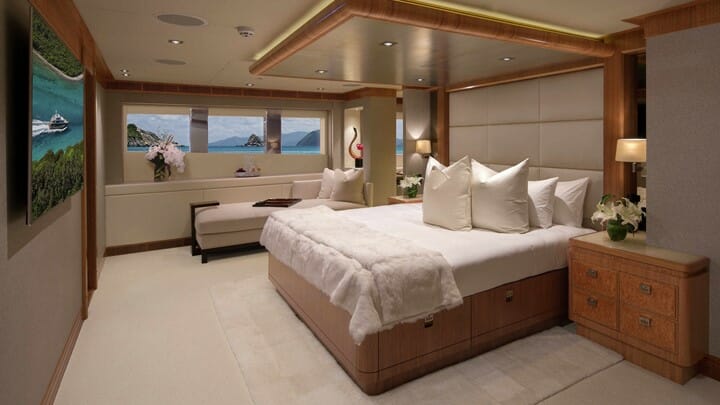 As striking as the bar is, though, the woodwork is outstanding. Riff-sawn white oak flooring pairs with walnut in the saloon and lower staterooms, while the master suite dresses in a lighter-colored eucalyptus. Crescent grain-matched all panels from the soles to the crown molding. Walnut burl panels also serve as accents across the interior. To get a sense of how meticulous the design was, Hay says Crescent analyzed each burl panel to ensure no “demons” existed in the book-matched patterns. In fact, the shipyard at each pattern the way a psychologist views a Rorshach test, realizing that viewers can see very different figures inside the patterns. “We looked at them with several people to avoid any odd patterns,” says Hay. The burl certainly adds life to the interior, breaking up what might have been monotonous wood paneling. 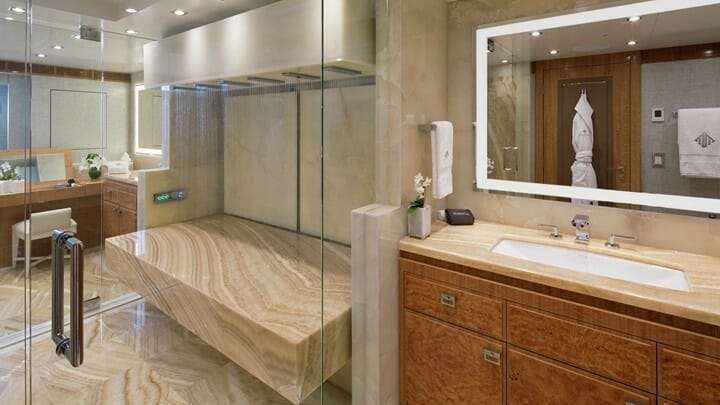 The owners of Muchos Mas had specific ideas for the staterooms’ arrangements, too. Among the four guest cabins below, the two aft staterooms can convert into a single, full-beam VIP. The main-deck master suite, though, has two particularly special features. For one, smart-glass windows turn clear or opaque at the push of a button. It also has one of the most spectacular heads on any yacht this size. Individual his-and-hers sides with sinks and toilets deliver privacy, while a two-person, computer-controlled Vichy shower in the center offers a spa-like experience. The shower’s six heads have programs for different temperatures, spray patterns, and pulses. The owners therefore can have a brisk wake-up shower, for example, or a relaxing massage on the long onyx bed. The onyx adds to the head’s upscale spa ambiance, too. 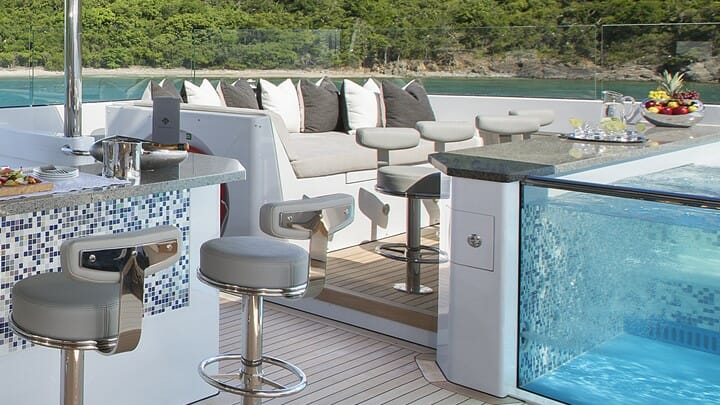 This deluxe head was one of JQB’s recommendations for turning Muchos Mas into a special boat. So, too, was the sundeck arrangement. Colorful ceramic tiles lend a lively feel to the bar and barbecue areas. The 54-jet hot tub has an inspired design. A shallow section lets a guest literally lie down and soak, The glass front, meanwhile, adds color and depth by showing off the water. Misters elsewhere up here provide cool respite on hot days. An 85-inch TV adds to the entertainment factor, connected to satellite service, Apple TV airplay, the Kaleidescape system, and even X-Box One. Come evening, the owners and guests can enjoy nighttime movies on a 12.5-foot HD projector screen. 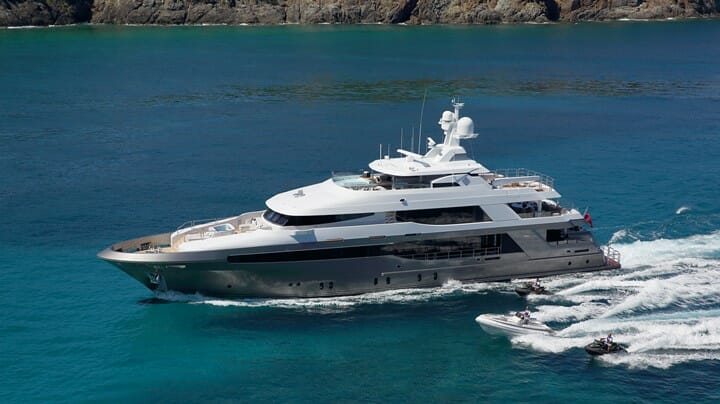 JQB also redesigned the foredeck to maximum effect. Originally, it was simple, with a small lounge. Now, the megayacht has a large lounge, a second hot tub, and two sunbeds. The foredeck becomes the place to be for private moments or when Muchos Mas is at anchor. The owners wanted to expand the beach club, too. Therefore, a foldout platform holds two Nikki Beach lounge chairs, while the interior serves as the traditional social area on the water. Speaking of on the water, Muchos Mas carries PWCs, stand-up paddleboards, towing toys, a wakeboard, sportfishing gear, and snorkeling equipment. Guests can additionally enjoy the 32-foot Intrepid center console serving as Muchos Mas’ tender.

Muchos Mas is available for charter through Burgess. It’s a fitting way for Crescent to show its renewed abilities to a wider audience. Charter guests will no doubt appreciate the craftsmanship and smart design that redefined Muchos Mas, just as much as the yacht’s owners do.