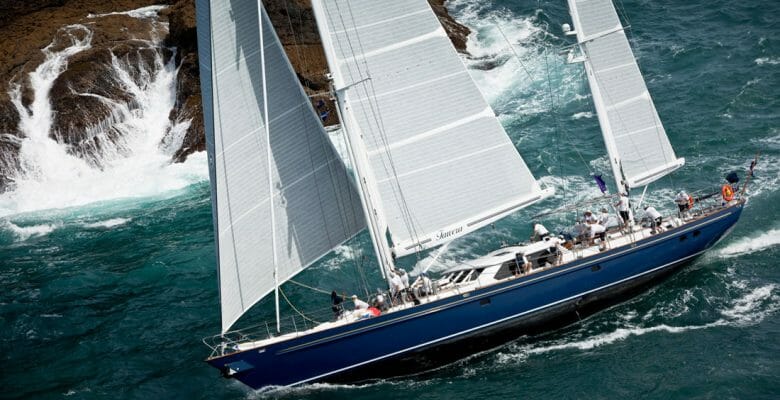 Calling a superyacht regatta a drag race may seem strange. But the New Zealand Millennium Cup was characterized as such by the tactician aboard Shamoun, one of the competitors. He should know: Shamoun had the finish line in sight when Mother Nature and two fiercely competing fellow competitors dashed the expectations of a win. One of those competitors, Tawera executed a beautiful gibe to become victorious.

The race was practically anyone’s to take, since four of the five Millennium Cup Division entrants were tied for first. Shamoun took the lead early. Tawera started out in second, falling to third on approach to the fourth mark thanks to Kealoha’s crew. Tawera “clawed her way back,” according to race organizers. But soon Silvertip and Janice of Wyoming became spoilers. Tawera and Kealoha didn’t take it lightly, regaining ground by the time they approached the mouth of the Bay of Islands, with the finish line in sight from there. Shamoun’s lead looked solid until the wind subsided just enough. Kealoha and Tawera suffered no similar fates, however, and raced neck and neck for first. Quick thinking by Tawera’s crew led to a quick turn, and victory. Seconds later, Kealoha crossed the finish line, followed by Shamoun. Janice of Wyoming and Silvertip were last, but never least, in this southernmost superyacht regatta.

The Pacific Division of the New Zealand Millennium Cup saw good action, too. Antaeus took the lead early and maintained it straight through to the finish line. Allegro and Steinlager II came in second and third, respectively, for the last day of the race. But, Steinlager II, having two wins under her belt already this week, won the title. “Big Red,” as she’s nicknamed, added yet another victory to a long list of impressive wins secured around the world.

Check out some of the final day’s action: