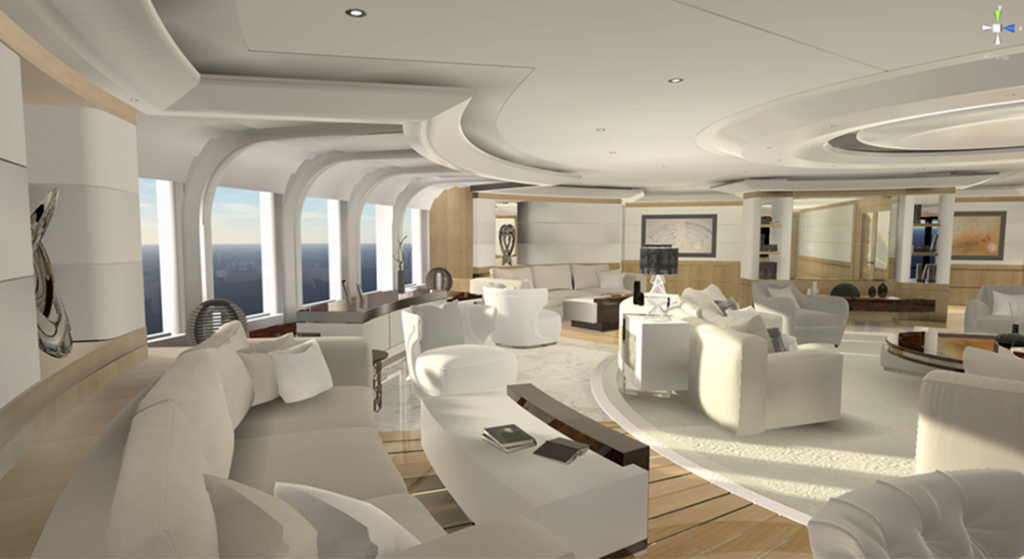 Virtual reality is still thought of in some circles as a gaming technology. But it’s transforming the way plenty of practical things get done. Including yacht buying. Yachting Partners International (YPI) is the first yachting company to partner with a virtual-reality specialist to sell a specific superyacht.

That yacht is the 394-foot (120-meter) Raptor project pictured here, a YPI central listing. (H2 Yacht Design and McFarlane Ship Design created her.) It’s all possible due to a meeting at the Monaco Yacht Show last fall. There, representatives from a company called Bricks & Goggles visited a number of exhibitors to demonstrate the technological applications. Bricks & Goggles is a virtual-reality company specializing in converting construction designs into the 3D format. Ingmar Vroege, co-founder of Bricks & Goggles, says that his team had already done virtual-reality presentations of tenders and smaller yachts. They naturally saw potential in the megayacht market.

YPI’s commercial and marketing director, Mark Duncan, literally “jumped” when Bricks & Goggles approached the company at the yacht show, Vroege says. He adds that Russell Crump, YPI’s director of sales, mentioned its team had been exploring the options.

As the video below demonstrates, the virtual-reality experience that Bricks & Goggles and YPI created lets clients see a superyacht in a new way. The Raptor project can be examined from all around the outside. Two interior rooms can be “walked through,” too. Vroege says that it took just a few weeks to complete the presentation, adding that the design team was quite helpful.

“For the first time in yachting history, you can iron out the elements you don’t like before you invest in the build,” Crump says, “elements you may never otherwise have thought of when working from a 2D or traditional 3D representation.” That extends to your captain and engineer, too, letting them see systems before any piping is run. Crump adds, “Imagine the money, time, and potential disappointment that can now be saved thanks to this technology?”

Bricks & Goggles is working with YPI on additional virtual-reality yacht tours. It also has an app demonstrating the Raptor experience. The Android app and the Apple app are both available now.