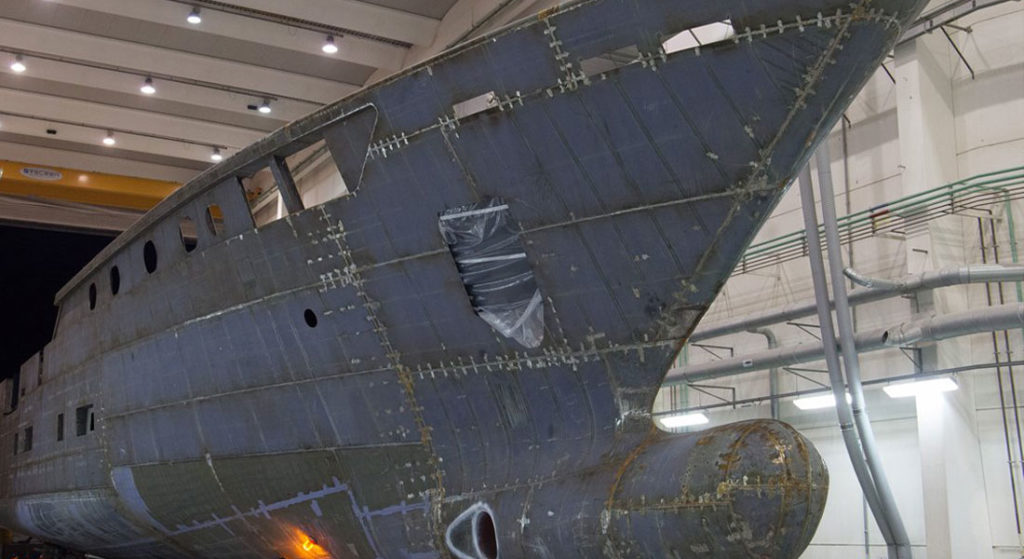 CRN shared the hull photo here on Twitter this week. As the model name states, the megayacht measures 50 meters, or 164 feet. The hull moved to another area in the build sheds where the superstructure could begin assembly. The superstructure is taking shape onboard the hull, in fact. Simultaneously, craftspeople are installing various support systems, and prepping decks for paneling and furniture installations. CRN says the 50M Superconero is on pace for a 2017 delivery.

With a beam of 29’5” (9 meters), the megayacht features styling by Studio Zuccon International Project and naval architecture by the yard’s in-house team. The 50M Superconero is not alone in this regard. The entire Superconero series, which includes smaller projects, has the same design team.

The interior design is from in house as well. CRN has not revealed information on the woods or other soft goods yet. But, the yacht has features that have appeared onboard other CRNs in recent years. These include a fixed balcony in the master suite and yet another balcony on the main deck, meant for use at anchor. The 50M Superconero additionally has an ever-popular beach club. The float-in tender garage that debuted aboard J’Ade is aboard, too, along with the adjacent lounge. The combination makes the tender bay a usable space for owners and guests, not solely a technical area, as is the case aboard most yachts.

Given her LOA, the 50M Superconero is meant for long-range travel. Best range should be 3,800 nautical miles at 11 knots. Power comes from twin Caterpillar engines.

If you’re wondering where “Superconero” comes from, it’s name of the first large-yacht series that CRN ever built. Created in the late 1970s, the series was actually called Super Conero. The yachts were quite big for their time, 75’5” (23 meters). On a related note, “Conero” echoed the name of a region near CRN’s headquarters in Ancona, Italy.