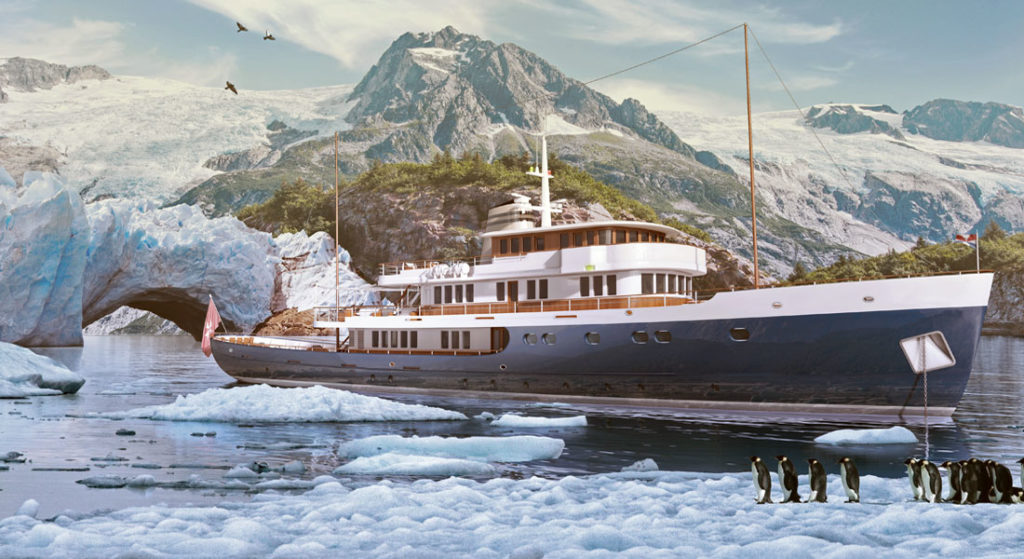 If classic yachts tug at your heartstrings, you’ll appreciate this megayacht. Hoek Design is responsible for the retro appeal of Project Lombok, a 184-footer in build at Turquoise Yachts. Anonymous, at least for now, the owner wanted an explorer that blends period charm with modern looks both inside and out.

While she may look genteel, the megayacht will indeed explore as many corners of the globe as possible. These include the notorious Northwest Passage as well as polar regions. Project Lombok therefore will meet certain ice-classification standards. She’ll also feature diesel-electric propulsion meeting the latest (and tougher) emission standard that went into effect last year. Specifically, that standard is the IMO’s (International Maritime Organization’s) Tier III. In brief, it requires vessels of more than 500 gross tons to emit 80-percent less nitrogen oxide if they’ll operate in parts of North America and the American territories of the Caribbean. Other regions of the world will enforce the standard in the coming years, too.

Due to her expedition purpose, Project Lombok will tote tenders, naturally. They’ll be hidden below decks, to keep her lines clean and characteristic. While the funnel, being made of fiberglass, may seem purely aesthetically pleasing, it will actually serve a purpose. It, too, will keep the Turquoise 56-meter’s lines clean by hiding the satellite equipment.

Few facts have come out thus far about the interior, other than teak providing the classic backdrop. Intimate indoor areas will complement elbow-room-friendly outside spaces. The overall appearance will be more modern than you might expect, too. Vickers Studio is working with Hoek Design to execute the decor. The studio’s chief, John Vickers, previously worked for Redman Whiteley Dixon, Candy & Candy, and Terence Disdale Design on a few yacht projects. He hung his own shingle in 2015.

Look for the megayacht to launch in late 2018, with delivery in February 2019, from Turquoise’s recently expanded facilities.