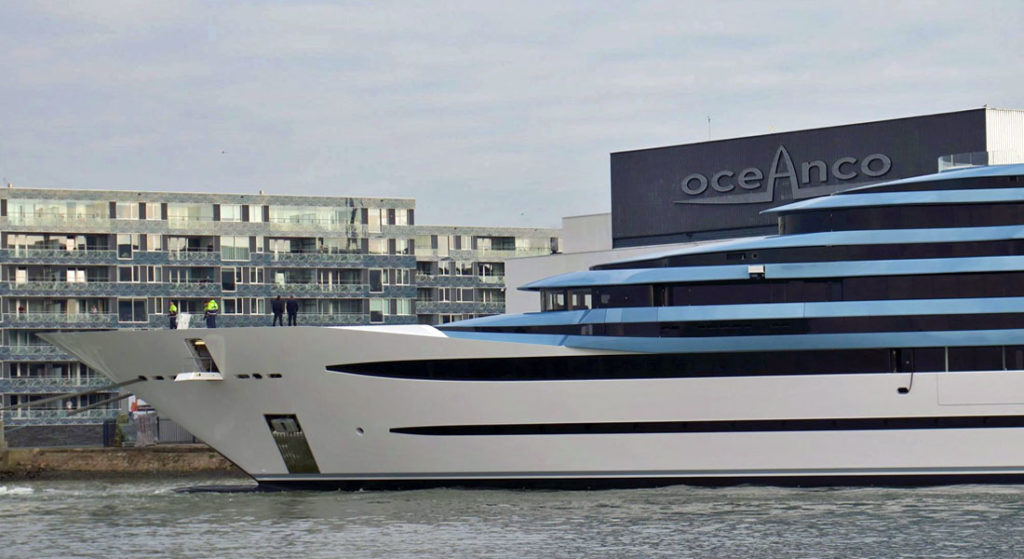 UPDATE, APRIL 19, 2017: Jubilee is listed for sale. Burgess, which holds the central listing, indicates her price is available upon request. However, one Dutch newspaper is reporting it to be €275 million. That’s about $294.5 million as of this update.

While Jubilee hasn’t yet been delivered, she is available fully outfitted. As mentioned below, that includes an aquarium built into the pool deck. Balconies flank the dining room and lounge bar as well. And, previously undisclosed renderings on Burgess’ website reveal an outdoor cinema on the upper deck, in proximity to significant seating and dining areas. They’re all further in proximity to a hot tub.

Additionally undisclosed until now, Jubilee has a cabin for a personal assistant on the owner’s deck. Furthermore, a massage room is on the same deck.

The megayacht code-named Jubilee, a.k.a. Oceanco Y714, is dominating the horizon outside of her build shed today. She launched just this morning.

“Dominating” is an apt description for the yacht. Jubilee measures 361 feet (110.1 meters). That makes her not just Oceanco’s biggest build to date, but also the biggest boat by any Dutch yacht yard. For comparison, consider the now-second-largest Dutch motoryacht, Symphony, from Feadship. Her LOA is 333 feet (101.5 meters). Also consider the now-second-largest Oceanco yacht, Project Solar, a.k.a. Y712. She’s a sailing yacht, still receiving her finishing touches, measuring 348 feet (106 meters).

Of course, as much as length puts a yacht into perspective, a better indicator is volume. So, to that end, consider these figures. Project Solar has a gross tonnage just shy of 3,000. Jubilee, meanwhile, displaces more than 4,500 gross tons. 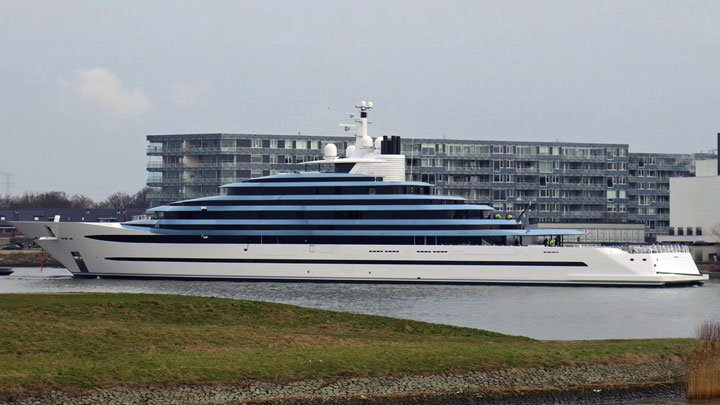 As you can imagine, Jubilee has been a long time in the making. Oceanco signed her contract in 2012. In early 2015, the hull and superstructure, already joined together, came into view upon floating out from a construction shed at one Oceanco facility. Towboats transferred her to the Oceanco facility in Alblasserdam for outfitting. That is where Jubilee emerged today.

Few facts are available about the massive megayacht, unfortunately. Styling is by Igor Lobanov, with naval architecture by Azure Naval Architects. Though she rises six decks high, Lobanov tricks your eyes into thinking there are more. (Try counting; you, too, will be fooled.) A helideck, with below-deck stowage, sits fully forward. Aft, meanwhile, a pool deck stretches out, complete with an aquarium. The interior, of which no renderings have been released, is by Sam Sorgiovanni Designs. Regardless, there’s abundant room from the beach club to the top deck to spread out and relax. Fifteen staterooms accommodate 30 guests, with one stateroom being an entire owner’s deck. Beam is 53’8” (16.4 meters). Some reports have her expected to see speeds around 18 knots, too.

The international yachting media aren’t the only ones interested in her. As you can see in the video below, Jubilee caught the attention of several spectators along the shore as tugs moved her into position: