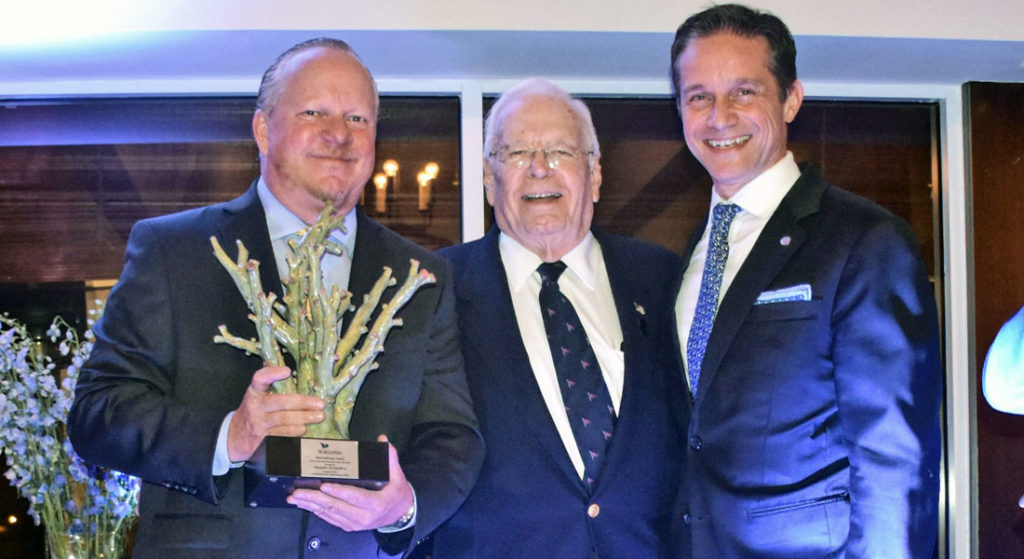 Hurricane Matthew may have forced the International SeaKeepers Society to postpone its annual Bal de la Mer from October to this month. But, last weekend SeaKeepers supporters, all passionate about protecting the oceans, turned out to honor Alexander Dreyfoos. Dreyfoos (middle) received the annual SeaKeeper Award for his decades of devotion to the undersea environment.

Fabien Cousteau (right), the well-known ocean conservationist and filmmaker, plus a SeaKeepers honoree himself, presented Dreyfoos with the award. “Having met some trailblazers and innovators out there, Mr. Dreyfoos is at the top of the list,” Cousteau said in his remarks. He went on to cite “a list of achievements that would make anyone blush.” Dreyfoos holds 10 patents for photographic equipment and technology, for example. He received an Academy Award for some of those inventions, too.

Cousteau commented that these inventions allowed people to tell stories in ways not previously possible. Between them and his decades-long support of ocean conservation, “You give back to the world to make it a better place,” Cousteau told Dreyfoos. “At the end of the day, we need to give back to our future generations. And I don’t know anyone who better deserves that honor than you, Mr. Dreyfoos.”

The SeaKeepers Award was significant for yet another reason. The International SeaKeepers Society was founded in 1998, and Dreyfoos was the first yacht owner to become a member. At the time, he owned a Feadship. Due to his wife Renate’s susceptibility to motion sickness, though, he commissioned a SWATH several years later. (SWATH stands for Small Waterplane Area Twin Hull. It employs two submarine-like hulls and a wide beam that together make for a more-stable vessel.) In 2008, he took delivery of that SWATH, christened Silver Cloud, from Abeking & Rasmussen. The Dreyfooses have cruised more than 40,000 nautical miles worldwide since then.

They have an equally ambitious trip planned for this year, too. Silver Cloud will traverse the infamous Northwest Passage. It’s the sea route connecting the Atlantic and Pacific Oceans via the Arctic Ocean. In keeping with his passion for conservation, Dreyfoos will deploy scientific equipment on behalf of the International SeaKeepers Society while there.