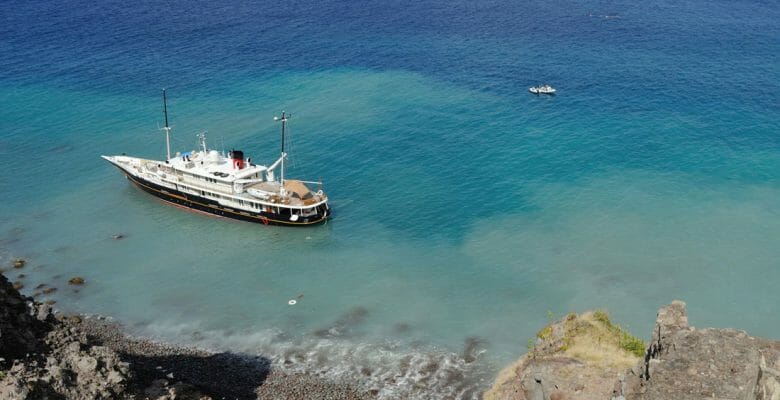 Salvage work began in the Caribbean this week to free Elsa, which ran aground less than a week ago. Simultaneously, personnel are trying to protect the marine environment surrounding her.

The 158’6” (48.35-meter) Elsa is on Saba’s western coast. The stranding occurred last Wednesday evening. The photos here are from the following day. Officials have not yet determined why Elsa ran aground. Satellite data shows she anchored up in a dedicating mooring area in front of Ladder Bay that night. Photos reveal her bowsprit still attached to the mooring buoy, too. Unfortunately, the grounding breached her hull, and fuel began spilling into the water. No one onboard reported getting hurt, and passengers and crew all departed the yacht. Local residents do report smelling the diesel from a hiking path perched above the bay, however.

Since the grounding occurred, local officials state that the owners have been cooperating with the Public Entity Saba and Saba Conservation Foundation. Together, they determined how to retrieve Elsa with as minimal additional damage as possible to both the yacht and environment. On Monday, government officials announced that salvage operations would begin yesterday. The first step: removing the remaining fuel from onboard. Next is removing Elsa from the shoreline.

Though classed as a research/survey vessel, Elsa looks inside and out like a superyacht. When built in 2004, by Scheepswerf Peter Sijperda in The Netherlands as Grace, she chartered regularly in Norway.

Government officials acknowledged that this is the second time in two weeks that a yacht ran aground in Ladder Bay. On March 18, salvage crews pulled a sailing yacht from the rocks. “These unfortunate incidents are rare,” the Saba Conservation Foundation says, in a statement. “Many efforts have been made over the past years to improve the resilience of the mooring systems in the Saba Marine Park.” It adds that personnel will re-inspect all moorings and replace any damaged lines. Furthermore, Marine Park Rangers will increase patrols to assist arriving yachts and ensure they safely anchor up. Yacht owners will receive new information regarding proper mooring procedures, too. And, finally, officials will commission an independent review of the mooring equipment to make sure it’s still suitable for open-water conditions.