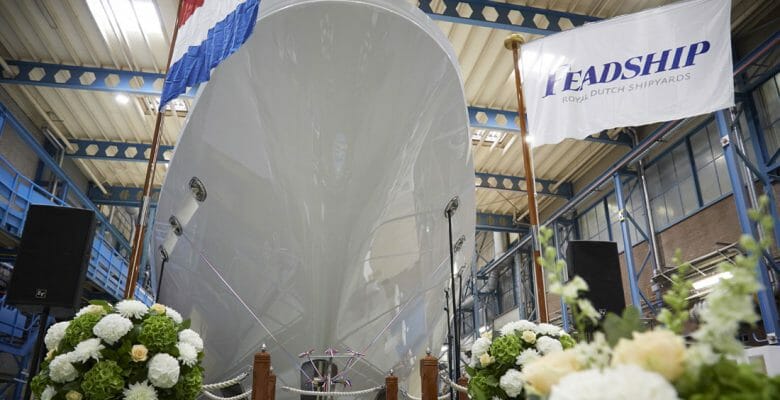 Glimpses are all we’re getting of the newest Feadship to launch. However, some of those glimpses give a good idea of what she’s all about. She’s Hasna, designed to allow multiple fun-loving generations to enjoy each other’s company, and the ocean.

It’s not unusual for a yacht to be family-focused. What is unusual, however, is how the owner conveyed that to Feadship. In fact, Jan-Bart Verkuyl, a Feadship director, explains, “He was the first owner ever to give a speed at the start of the build to the entire workforce.” That owner, hailing from Australia, even flew friends in with him several times to visit the Dutch shipyard during construction.

Measuring 239’5” (73 meters), Hasna blends the owner’s own ideas along with what he learned from owning and chartering over the years. His captain adds that he’s been attending boat shows for more than two decades, too, further adding to his knowledge base. Among the most important ideas, Hasna had to have an easily accessed beach club. That’s why the engine room sits forward of the guest suites. This way, the younger family members in particular can quickly head out for enjoyment. It includes a relaxation area and a gym. In an interesting setup, the beach club isn’t fully aft. It therefore doesn’t open out aft, either. Instead, it sits just forward, with platforms deploying to port and starboard. 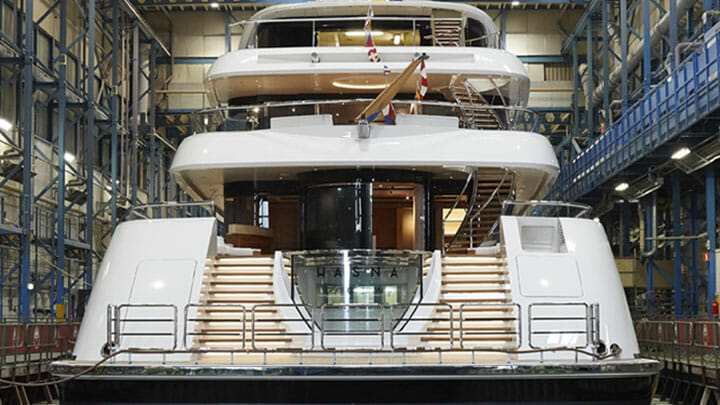 There’s logic to the setup, of course. The owner wanted Hasna to have a long, deep pool (above) on the main aft deck. It’s long alright: 26 feet (8 meters). You can just make out the letters of her name on the curved glass side, too. Imagine how it will look when the waterfall the owner also wanted is running.

Additional features aboard Hasna are plenty big. Crew cabins are reportedly more ample than usual. Furthermore, there’s a second crew lounge. Also, Hasna has a dedicated butler’s cabin. Still on the subject of big, the megayacht puts 82 feet (25 meters) of sundeck space at guests’ disposal. This includes an indoor-outdoor bar, clad in teak and marble. Part is inside a central relaxation spot. But, that enclosed area becomes open air thanks to sliding doors fore and aft. It ends outside in a Teppanyaki bar. Furthermore, Feadship De Voogt Naval Architects and Redman Whiteley Dixon concealed the gap in the bar where the inside and outside meet via a sliding champagne bucket. Throw in a traditional Aussie barbecue area, and Hasna has one huge party zone.

The owner’s family and charter guests alike should enjoy the atmosphere inside the megayacht. Here, too, Redman Whiteley Dixon worked closely with the owner. In fact, they first started collaborating in 2012, according to Justin Redman, the founder and CEO. With a 39-foot (11.9-meter) beam, Hasna has whitewashed oak with walnut and fabrics interspersed throughout her decks. Bronze plays a prominent role in the detailing, as do tones, textures, and other materials. For instance, highlights of the spa include rich teak, cedar, mother of pearl, metal, and leather. Five further fabrics appear here as well. Redman Whiteley Dixon worked with the owner to make a personal connection to the decor in some areas. A good example: smoked eucalyptus, in the master, a wood from his native Australia.