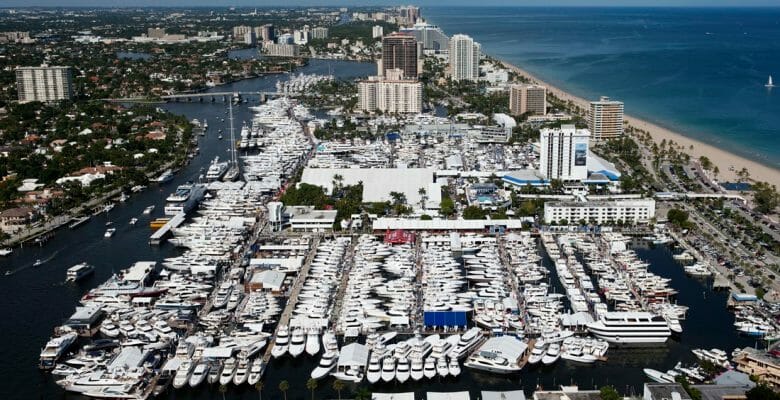 A year after a developer withdrew renovation plans for Fort Lauderdale’s famed Bahia Mar, the site is locked in for the world’s largest in-water boat show for the next 33 years. The owners of the annual Fort Lauderdale International Boat Show, a.k.a. FLIBS, signed a new lease this week. As a result, new redevelopment plans for Bahia Mar got a boost in the arm, too.

The trade organization Marine Industries Association of South Florida (MIASF), which owns FLIBS, now has a 30-year lease extension. In combination with the existing lease, this means FLIBS will stay put through 2050.

Entering its 58th year, FLIBS uses all available space of the 39-acre Bahia Mar marina, along the Intracoastal Waterway. It also uses the nearby convention center and other marinas, but Bahia Mar is the biggest footprint. In total, about 1,500 boats, yachts, and megayachts exhibit, most in the water at Bahia Mar. Furthermore, according to a study commissioned by MIASF, FLIBS had an $857-million impact on Florida in 2015. (The 2016 figures aren’t yet available.)

FLIBS’ commitment to Bahia Mar means new redevelopment plans for the site can proceed. Jack Seiler, Fort Lauderdale’s mayor, has long stated any changes at Bahia Mar hinged upon the show remaining put. Just last summer, in fact, he and other city officials began pressing for a minimum 30-year lease. Seiler was concerned FLIBS would head elsewhere without a commitment. The Sun-Sentinel newspaper reports that MIASF dispelled the fear. “We have the square footage we need,” it quotes MIASF’s president, Phil Purcell, as saying.

As a result of the lease commitment, Fort Lauderdale city commissioners voted to permit Bahia Mar’s operators to submit a new redevelopment plan. Preliminarily, the plan includes a new hotel to replace the existing one, plus seven 11-story apartment buildings. Restaurants and a grocery store are also included. Naturally, dockage for yachts and megayachts remains. The new proposal represents quite a change from the one withdrawn last year. That called for two 29-story condo buildings.

The redevelopment plans still need rounds of review by the city. Those reviews may lead to further changes. However, FLIBS’ footprint is set.

On a related note, this coming fall, FLIBS is day earlier than the past practice. It begins on Wednesday, November 1 and ends Sunday, November 5. Until now, the show has always been Thursday through Monday. The Wednesday-to-Sunday format will apply to future shows, too.