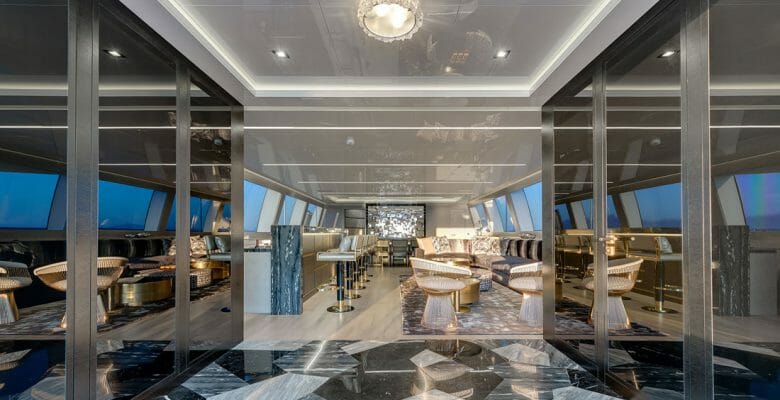 Many a megayacht owner considers his or her project a work of art. Styling is sculpted, interiors are fashioned. So with a name like Da Vinci, you might expect a yacht to truly strive to impress. Like the Renaissance artist she’s named for, the newest Mangusta 165 reflects depth of color and even illusions of depth and distance.

There’s a lot of interplay among tones of grey, black, and white aboard Da Vinci. The owner collaborated with Maxine Tissenbaum, a Canada-based designer, to create complexity. Ash is the predominant wood, stained each of the just-mentioned tones. Though, stepping through the main-deck entry (above), you’d be forgiven for not paying attention to wood being aboard. Three types of marble underfoot—black Zebrino, black and white veined Marquina, and blue Palissandro—command attention. Furthermore, they’re each different sizes and shapes. Together with the mirror-like, painted black glass cabinets running floor to ceiling, it’s a dramatic setting. 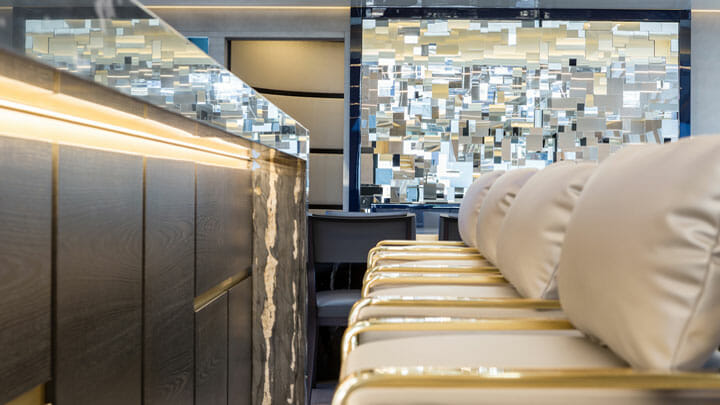 More drama awaits in the saloon and dining area. While Mangusta 165 buyers can configure the decks as they wish, all 11 thus far wisely have kept the area open. Some have even done so straight to the helm. Da Vinci’s owner provides separation for the latter for privacy. It also provides welcome night-vision protection for the captain. But, there’s no mere wall with a painting. Rather, just beyond the black Zebrino marble bar (with brass accents), Da Vinci draws your attention directly to mirrored art. In fact, the piece comprises dozens upon dozens of small mirrors. Similar to the megayacht’s entry, they’re all different shapes and sizes. Depth of illusion that the Renaissance master himself would appreciate.

Due to the main-deck devotion to entertainment, all sleeping spaces lie below decks. Da Vinci reserves full-beam accommodations for the owner, of course (above right). Plenty of pearly whites, polished brass, and black contrast and complement each other here. Grey and white adorn the VIP, while black and white characterize one of the other guest staterooms. The remaining guest stateroom (above left), though, is decidedly different. Da Vinci’s owner wanted two sets of bunk berths. In yet another artistic twist, slanted steps set into in the wall lead to the top bunks. Additionally artistic, the steps are black wood, flanked by grey marble.

The Mangusta 165 is well known for being the fastest series-built superyacht in the world, reportedly exceeding 35 knots. Owners and guests can board in Florida’s Broward County, for example, and arrive in the Bahamas before lunch. Alternately, they can sip coffee in the South of France and lunch in Sardinia. Wherever Da Vinci ventures, she can do so at ease even at displacement speeds. The Overmarine Group, builder for the Mangusta brand, recognizes slower speeds are often uncomfortable for fast yachts. Seakeeper stabilizers complement the quadruple MTU and KaMeWa waterjet package—which the builder says consumes no more fuel than the triple-engine packages of previous Mangusta 165s.