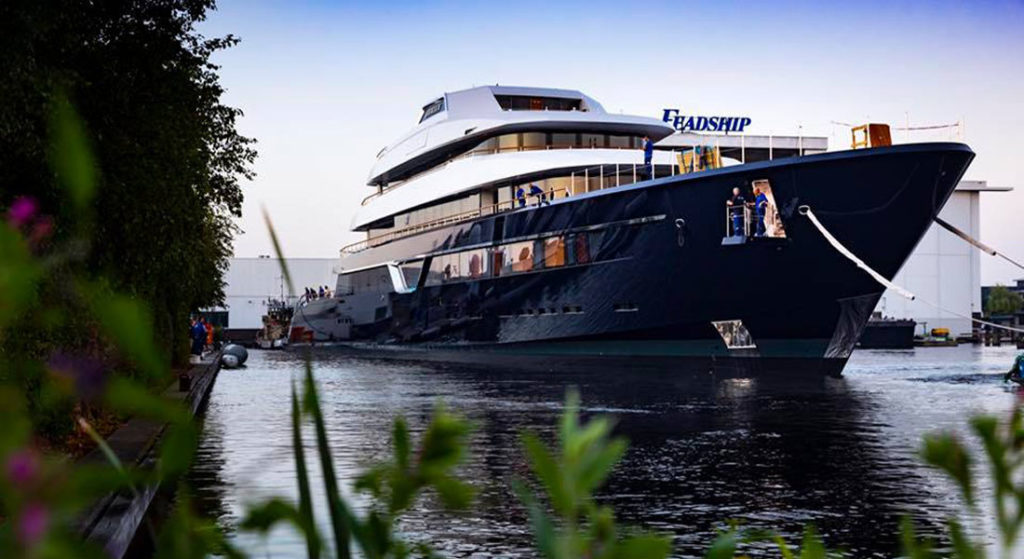 While most of the world’s citizens were still asleep in their beds, staffers at Feadship were wide awake, ready for a launch. Lonian, mostly complete structurally except for her navigation mast, floated outside her build shed in the wee hours of the morning.

In fact, as you’ll see in the video below, the sun was not even up yet when a tugboat got into position. Due to the pre-dawn conditions, it’s tough to see the rich blue hull of the 286-foot (87-meter) Lonian. But, Feadship took the image above once the sun did start shining, and shared it via social media.

Although the Dutch builder didn’t reveal her name with that photo, yacht spotters on hand could see “Lonian” on her nameboards. This is the same yacht previously known as Feadship YN 700, which people got a peek at 13 months ago. The partially completed megayacht made a move from Feadship’s subcontractor to the Royal de Vries shipyard.

Lonian features styling by Sinot Exclusive Yacht Design. This, unfortunately, is the only additional fact we can share so far.

If you just want to see Lonian nearly complete, fast forward through part of the video. From about 11 seconds in to about 56 seconds, the videographer takes a look back at her leaving the subcontractor’s facilities and arriving for fit out.