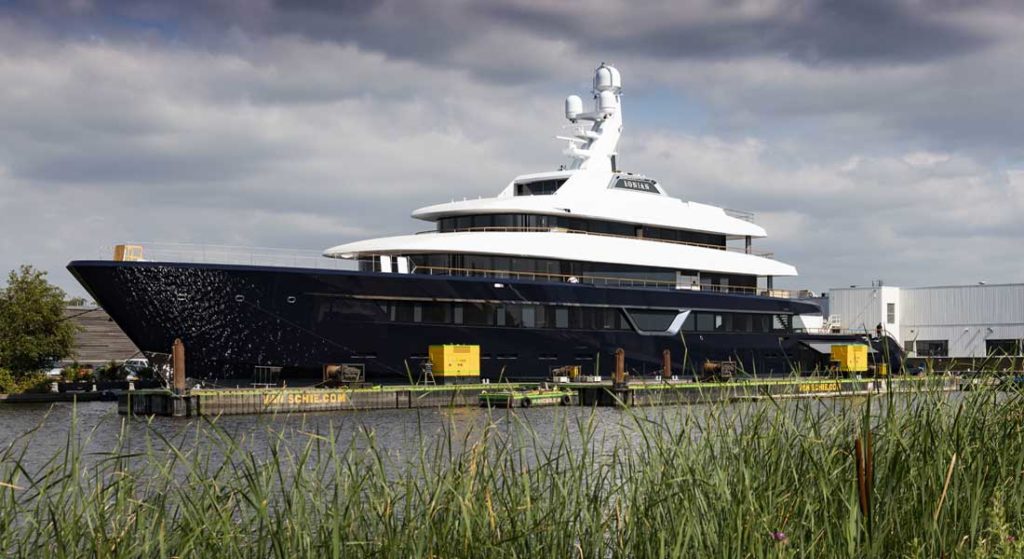 Dutch citizens of the towns between Aalsmeer and Rotterdam are accustomed to seeing superyachts slowly travel along the canals. However, crowds still gathered yesterday and Sunday as Feadship transported Lonian from its shipyard. This, in eventual preparation for delivery.

Known as Project 700 during construction, Lonian is still relatively secretive. Launched in July, the 285’5” (87-meter) has styling by Sinot Exclusive Yacht Design. The same design team worked with with Richard Hallberg Interior Design for arranging and outfitting the staterooms, saloons, and more. Richard Hallberg Interior Design is based in Southern California and renowned for mixing antique and contemporary pieces. Specifics on the interior remain confidential. But, Feadship does confirm that the owners will welcome 12 guests onboard. In addition, it says, 27 crewmembers will take care of Lonian and her passengers.

Despite not seeing what she looks like inside, the citizens who gathered along the shores of the canals in The Netherlands this week did get good looks at Lonian’s imposing profile. Thanks to the team at Dutch Yachting, the social media channels for Dutch yachting enthusiasts, you can feel as if you were there, too.

The video includes footage of some distinctly Dutch canal features. Two are vertical lift bridges, while another is the Gouwe Aquaduct, all relatively near Gouda. The aquaduct is particularly famous, since it crosses directly over a major highway. Several superyachts cross its bridge under tow each year, with Lonian being the latest.