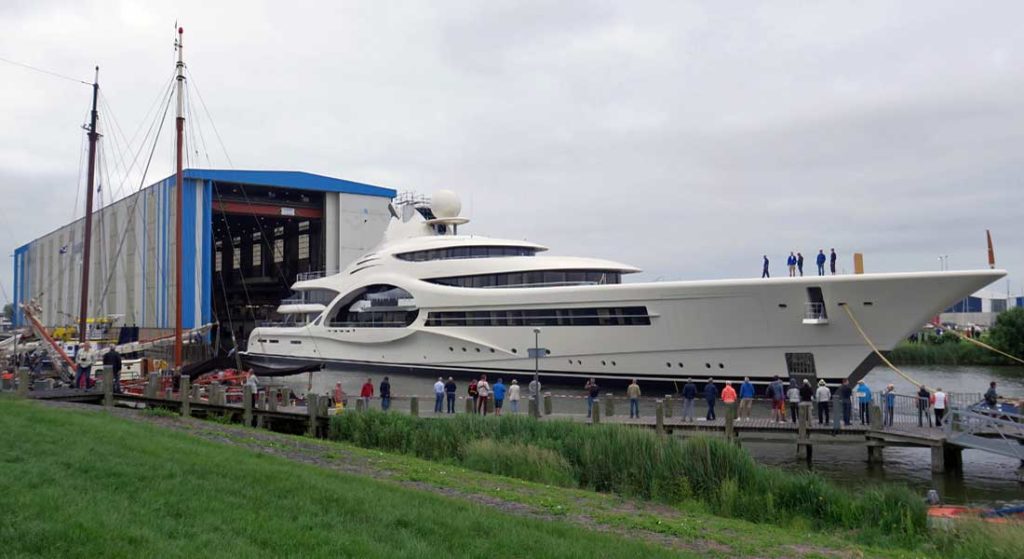 The largest-ever Feadship is off on her maiden voyage. As you’ll see in the footage below, Anna departed The Netherlands over the weekend.

At 361 feet (110 meters), Anna outranks Symphony as the biggest boat from the builder. Symphony secured the title in 2015, measuring 333 feet (101.5 meters). However, by the time Anna’s then-recently joined hull and superstructure made their way to Feadship’s Makkum facility in December 2016, yacht watchers knew she’d take the top spot.

December 2016 is also the first time yacht watchers and media could analyze her styling. Still referred to as Project 1007 at that point, the megayacht showed off lines by from the UK-based firm Michael Leach Design. Among the most prominent features were what you might consider an eye- or teardrop-shape detail around amidships. They’re two decks high, too.

Once Anna received her navigation mast, though, the day after her launch in June, that became a big focus of attention. It further became a focus of controversy. On various social media sites, debates ensued over whether it detracted from her overall appearance.

Decide for yourself upon watching the video. There are close-ups as well as distance glimpses of Anna, and her mast. No matter which side of the debate you find yourself on, you can’t deny one thing. That mast is massive.

Feadship still cannot divulge further information about Anna, at the owner’s instruction. However, that may change in the coming months. Perhaps we can learn more about the interior design, by Brian J. McCarthy, a residential specialist.