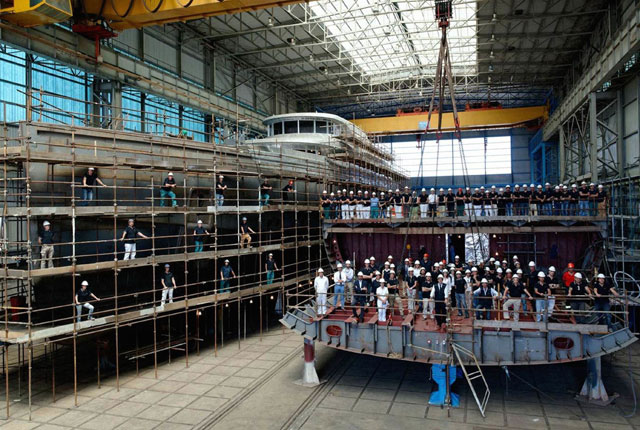 The builder is keeping detailed information close to the vest, unfortunately. For now, it will only reveal that both 100-meter-plus megayachts are being built at its Livorno site. (Benetti has two additional shipyards, one in Fano and one in Viareggio. Livorno has the ability to accommodate more of the biggest projects.)

Super-size superyachts are not new for Benetti. It currently has one megayacht of 90 meters (295 feet) in build for completion for next year. Back in 1980, it built the 282-foot (86-meter) Nabila, for Adnan Khashoggi, a high-profile Arab businessman. The length was astounding for the time. She has continued to astound over the ensuing decades, passing at one point into the ownership of Donald Trump, who christened her Trump Princess. Today, the yacht is known as Kingdom 5KR.  Twenty years later, Benetti built Reverie, measuring 230 feet (70 meters). Even then, it was rare to see megayachts of such magnitude.

It’s interesting to note that 14 megayachts of 164 feet (50 meters) and larger are in various stages at Benetti’s Livorno facility.