You are here: Home / Builders / Yard News / Nick Bischoff on Benetti Giga Season: “It’s Made Us a Better Builder” 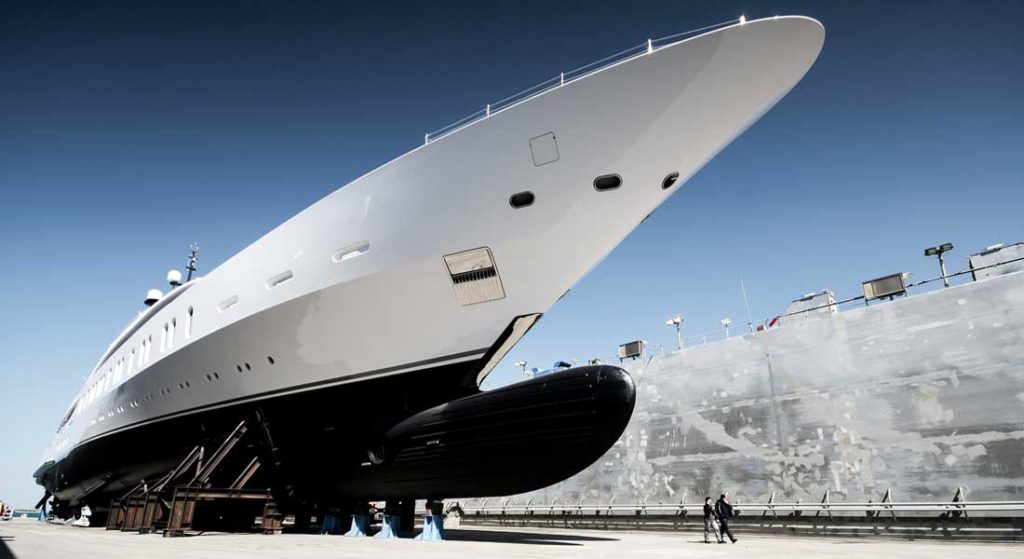 Earlier this year, Benetti accomplished an important first. It was a first not just for the shipyard, but for any megayacht builder around the world. It launched the third of three yachts that each exceeded 100 meters LOA, all within 100 days of each other. First came Benetti FB277, in December. Next up was Benetti FB272 in February, followed by Benetti FB275 (above) in March. With one delivered and the other two finishing up, we spoke with Nick Bischoff, Benetti’s country manager for the Americas. As he explains, catering to what the shipyard calls giga yachts requires a lot more than adding larger build sheds.

MegayachtNews.com: What was the driving factor for the shipyard to get into this end of the market?

Nick Bischoff: We had the eighth-largest yacht in the world in 1980 when we delivered Nabila. That became Trump Princess and is now Kingdom 5KR. We didn’t describe them back then as giga yachts. Then, in 2016, we delivered Lionheart, which was a 90-meter, with a 2,990 GT. So, we started to show that we could build bigger boats. The market was changing, too. People wanted bigger and better, they wanted more accommodations, and they wanted to expand their reach. So it wasn’t new to us. But, we knew in order to get over the 100-meter platform, we would need to invest a lot more in resources. We spent €18 million in infrastructure improvements—not only in the buildings, but in the lifts, training, human capital, and more. It was a commitment from a financial point of view and a human capital point of view. That was critical to the success.

MegayachtNews.com: What were the challenges that came with such a small pool of buyers?

Nick Bischoff: Our intel tells us there are four to six of these yachts built annually, so we’re competing for them. Having three major projects like this going on at one time over a four-year period occupied three sheds of the eight on the Livorno property. The other five sheds are building projects 80 meters and lower, and we need human capital on these projects, too. The biggest of the giga yachts had 250 workers on her each day. The medium-size one was 150 people every day. The smallest one was 100 people every day. But, we also have to build other boats in the yard, too. So the pressure was, how do we manage all those resources so that we can meet our budget every year and without compromising the five other builds? All eight of those sheds were filled.

Based on what I’ve heard from our chairman Paolo Vitelli and our CEO Franco Fusignani, the ideal situation will be to always have one giga yacht in build. We build 48 meters and larger in that shipyard. So, the 48-meter customer, or the 67-meter customer, is just as important to us as the 100-meter-plus customer. Many of them are on their second, third, or fourth Benetti, too, so we’ve got to treat them all the same. They’ve got to feel they’re getting the same amount of time and resources committed to their project. So it is a juggling act.

To launch three of these in 100 days has never been done before. So the ramp up was amazing, and the growing pains we had to go through to get into sync were incredible. But I think that experience has been invaluable. It’s made us a better builder, and we’re ready to take on the next big project.

MegayachtNews.com: So what are some of the lessons you can apply to not just future 100-meter-plus projects, but also across the board?

Nick Bischoff: With a custom project, the more up-front work we can do with the designer and the client will result in less change orders. So it’s going to be a more efficient build schedule. Better planning and design, better purchasing for parts and materials. The clients have expectations on delivery dates, so you want to get out of the chute and start cutting the steel. As the boats get bigger and more complicated and complex, there’s a lot more up-front design work that needs to take place. Time is of the essence for these folks. They don’t want to wait, and we’re competing against yards that are quoting maybe better delivery dates, and maybe overpromising. We don’t want to do that. We want to deliver on the commitment we made. If anything, we’d rather under-promise and over-deliver.

MegayachtNews.com: What about the education level of these buyers? Are they more knowledgeable than the average customer?

Nick Bischoff: It’s a team effort on the owner’s side. They’ve got unbelievable support teams around them, from owner’s representatives to additional surveyors to attorneys to really capable captains and crew. What they don’t know, they’re quickly educated on, and find really capable people to manage that project. The key is to do the due diligence: find the right owner’s representative and team to come in to make sure the builder’s team is held accountable to the tech specs and G.A. we presented them, and sign off on every step along the way. Regardless of how many yachts they’ve owned or what size they’ve been, in the deals that they do in their lives, they’re used to pulling from all the capable resources around them to get the job done right.