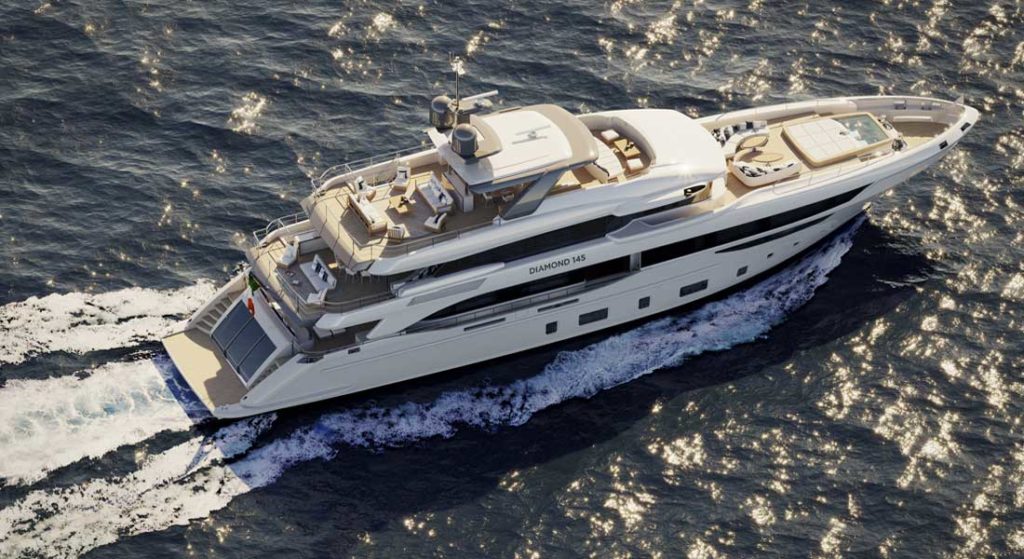 UPDATE, NOVEMBER 6, 2019: Benetti has sold hull number two of the Diamond 145. No details are available on the customized arrangement, though, or delivery date.

The newest semi-custom series from Benetti is in build for a buyer. Hull number one of the Benetti Diamond 145 megayacht series is about a year away from delivery, in fact.

Benetti revealed the sparkling new series during last fall’s Cannes Yachting Festival. Measuring 144’6” (44.063 meters), the concept comes from the shipyard’s own designer, Giorgio M. Cassetta. Lightness and brightness are two watchwords, which come as no surprise, given the series name. For example, about 80 percent of the upper deck features glass. The master suite, on the main deck, benefits from big windows, too. So does the saloon. Pale tones throughout the interior accentuate the feelings as well.

Illustrations of the interior, which the owner is outfitting with Achille Salvagni, are not available. Regardless, they should reflect contemporary, sophisticated flair, with curves and gathering spaces for several people to enjoy each other’s company. The Benetti Diamond 145 accommodates 10 people in the owner’s party. Interestingly, the owner has made some unexpected space changes. For instance, instead of the dining area sitting on the main deck, it’s on the upper deck. This allows for the saloon to be a bigger social space, something the owner specifically wanted.

In keeping with what you might expect, though, this Benetti Diamond 145 spreads the owner’s suite across the full beam. The 29’7”-wide (9.05-meter-wide) suite is further fully forward on the main deck. Meanwhile, eight friends and family get staterooms below decks.

Of course, alfresco areas aren’t out of the equation. The Benetti Diamond 145 has the all-important beach club, plus dining areas on the uppermost deck and aft of the skylounge. Guests will certainly gravitate toward the bow when the megayacht is at anchor. It’s because a big sunpad and equally big pool dominate the deck space.

Several anchorages will be at the owner’s and guests’ disposal. The Benetti Diamond 145 should see 3,800 nautical miles at 11 knots, under MAN power.