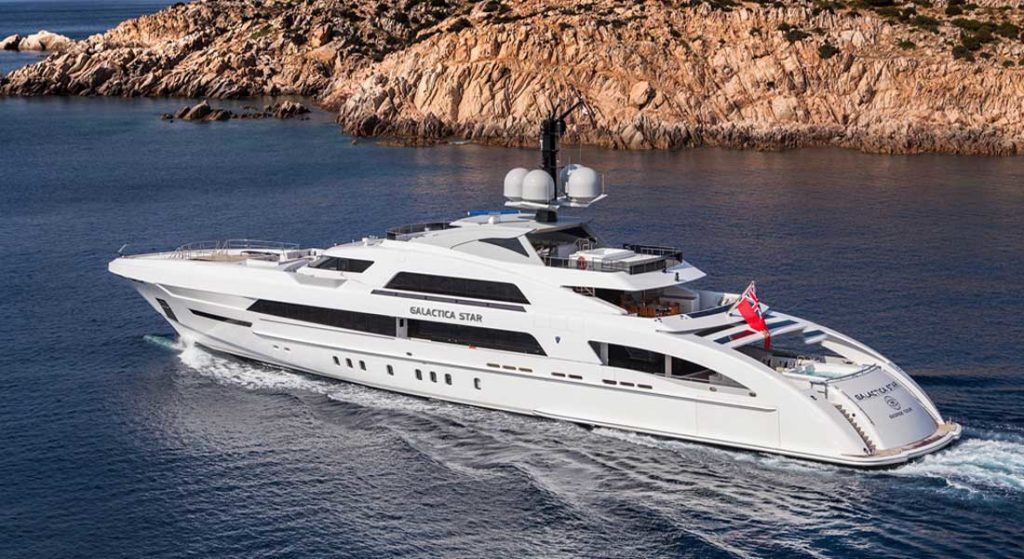 UPDATE, APRIL 6, 2019: Fraser Yachts is offering Galactica Star for sale under a sealed-bid arrangement. Bidding opened April 4 and closes May 19. Following the close of bidding, the winning bidder will have five days to deposit five percent of the accepted total into an escrow account. The full balance is due by May 31. Delivery will then be on or before June 5. For full details, visit the dedicated website for the judicial sale.

The U.S. Department of Justice and the Federal Republic of Nigeria received U.S. federal court approval to sell Galactica Star as part of an ongoing corruption case against two Nigerian nationals. What’s more, they plan to move quickly. Bidding for the 213-foot (65-meter) megayacht will open in early April, with a minimum reserve price of $42 million.

The situation involving the megayacht dates back a few years. First, in May 2016, the Nigerian government froze Galactica Star, as a result of the Panama Papers investigation. The investigation revealed that Kolawole Aluko, a Nigerian oil businessman, acquired the yacht, via a shell corporation, with diverted profits from oil sales. The U.S. government also accused Aluko and another oil executive, Olajide Omokore, of laundering money in the United States and using it to acquire the yacht, among other assets.

However, another company, Lightray Capital, acquired the yacht in July 2017. Four days later, the Department of Justice sought a civil forfeiture order. A federal district court in Houston granted it in October. As of January 2018, though, Galactica Star was still not in U.S. hands. In court filings that month, government officials claimed Lightray was stalling on returning her to U.S. waters from Mexico for the arrest to be carried out. In addition, they claimed, Lightray admitted to repeatedly failing to pay the crew, as well as maintenance and insurance costs. The Department of Justice therefore wanted to compel Lightray to pay all outstanding fees, removing “imminent risk” to the yacht.

Complicating matters, just prior to the civil forfeiture complaint filing, Galactica Star became the subject of a civil proceeding in Mexico. In brief, that lawsuit resulted in a lien on the yacht, preventing her from leaving the country. The Department of Justice claimed it was likely a “feigned or collusive lawsuit” purposely to prevent the seizure. After months of work involving both countries’ officials, in May 2018, Galactica Star returned to the United States.

Just last week, a federal judge in Texas granted the Department of Justice’s and Nigerian government’s joint request to sell the yacht. According to Law360, a legal news service, U.S. District Judge Keith Ellison approved it due to high maintenance and dockage costs. Specifically, Ellison indicated the estimate was $170,000 per month. “The court also finds that the yacht is subject to market value depreciation and deterioration while it remains in the government’s possession,” he writes.

According to the joint request, bidding for the yacht should open on April 5. The governments agreed on the minimum reserve price of $42 million. Bidding will remain open for 45 days. In early filings dating to the initial freeze, the Department of Justice valued Galactica Star at $80 million.

Heesen Yachts delivered Galactica Star in 2013. The shipyard is not involved in the case. The megayacht has accommodations for 12 guests and 10 crew. For photos and more details, see our Megayacht News Onboard feature.