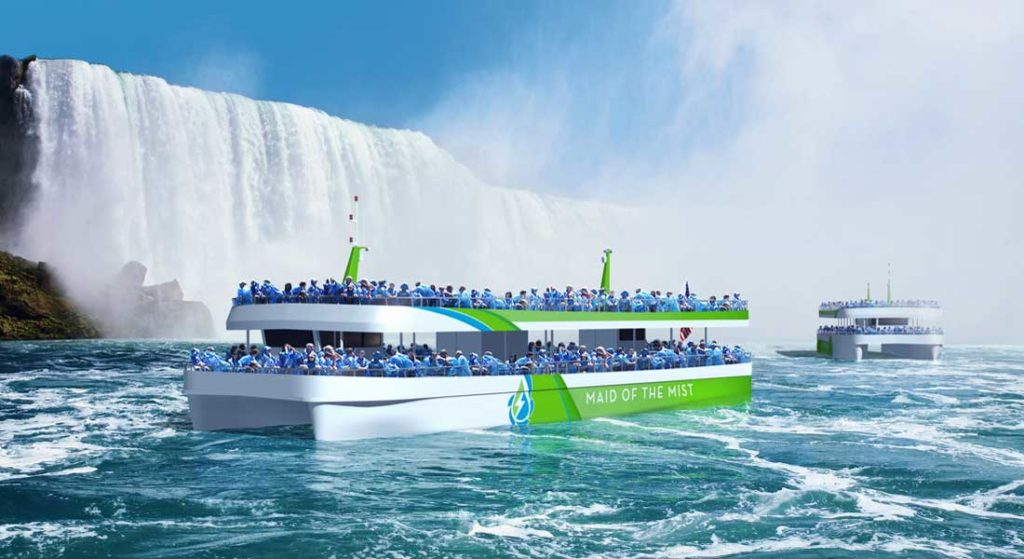 As famous as Niagara Falls is, the Maid of the Mist fleet holds equal renown. More than a million visitors flock each year to the American side of the falls, in New York, and board these boats. The fleet operator is replacing his current boats with two new, emission-free catamarans from Burger Boat Company. What’s more, once assembled, these catamarans will be the first all-electric vessels built in the United States.

“Once assembled” is a key phrase. Burger Boat Company is actually constructing the catamarans, which will measure 90 feet each, in modules. The modules, in turn, will ship across the country aboard trucks for assembly. “They couldn’t come up with any possible way to send a boat” from the shipyard to the fleet’s base, says Jim Ruffolo, president and CEO of Burger Boat Company. It’s impossible for a vessel to travel on her own bottom from Lake Michigan, the builder’s home, to the operator’s base at the falls, which pour into the river between Lakes Erie and Ontario. Even the commercial shipping traffic that frequents the Great Lakes diverts to the Welland Canal because of the falls.

Despite not building the catamarans in the usual way, Ruffolo says, “it’s a cool project.” Ninety-five employees have been constructing the roughly 40 all-aluminum modules since January. “The shipyard is loaded with modules!” he continues. The number of modules is high because of the transportation challenge. Each module can only be as large as the bed of a transport truck. The construction timetable has been tight, too, Ruffolo adds, due to the fleet operator wanting to put the new Maid of the Mist boats in service late this fall. “We’re very confident in what we built,” Ruffolo says, adding that Burger is continuing to assist the fleet operator with as many assembly logistics as possible.

Once assembled, the boats will run on ABB’s all-electric propulsion. High-capacity battery packs will power 563-hp electric motors. Note that the propulsion system doesn’t use gensets, unlike current superyachts with electric propulsion options. This means no fumes, vibration, or engine noise. The boats will charge between each trip to the falls, while passengers are disembarking and boarding. Specifically, they’ll need just seven minutes to charge.

“We are thrilled to be the US’s first vessel owner to add all-electric ferries to our fleet,” says Christopher M. Glynn, president of Maid of the Mist Corp. All-electric superyachts don’t yet exist. But, Ruffolo says Burger has received inquiries from owners wanting to incorporate electric technology.