With delivery set for early next year, the first Mazu 82 already has her teak decks laid, and about half her furnishings in place. The largest model so far from the Turkish builder represents its entry into megayacht territory.

A little behind schedule due to some changes, the Mazu 82 was initially expected to launch by summer. However, it is still less than a year between now and when the owner, who is also from Turkey, signed the contract.

The flagship of the Mazu lineup (it also has a 38, 42, and 52), the Mazu 82 employs carbon composite construction. The light weight should help with performance. The shipyard expects the triple Volvo Penta IPS system to allow a 40-knot top speed as well as a 35-knot cruising speed. Of course, the IPS system additionally boosts maneuverability and fuel economy. 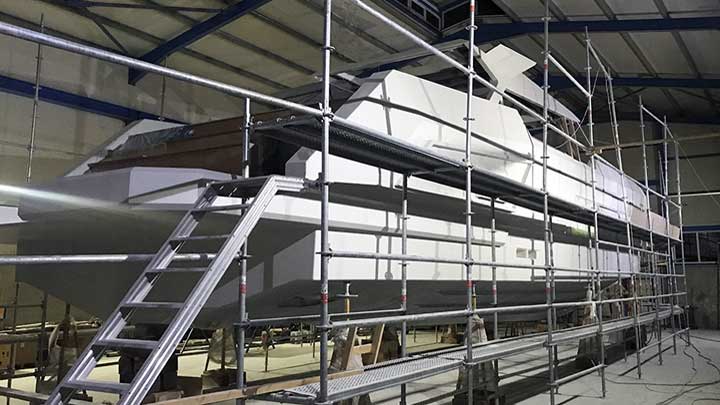 The sporty-performing megayacht has complementary sporty styling, from the in-house team. For the first time, though, Mazu Yachts is working with an outside interior design firm. Tanju Özelgin proposed subdued tones and subtle textures throughout the three-stateroom yacht. The low-key approach further employs indirect and direct lighting, plus lets natural light streaming in through the large ports enhance the ambience.

With a beam of 19’4” (5.9 meters), the Mazu 82 has a full-width master suite, along with a VIP and a double cabin for guests. All three are below decks, since the styling is that of an open sportboat.

Mazu’s craftspeople are currently installing the large ports. They should begin exterior painting as soon as all interior elements are in place, too. The triple IPS package is already onboard.

Following the owner’s first season of cruising, the Mazu 82 will appear at the Cannes Yachting Festival next September.