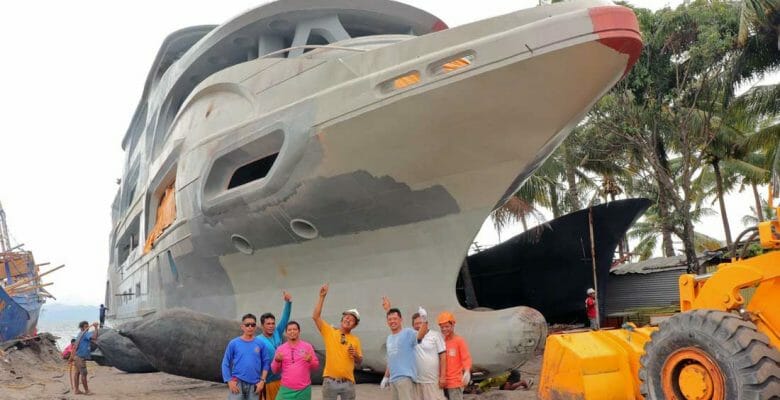 If you are accustomed to yacht launches taking place at a traditional boatbuilder’s facilities, the photos here will surprise you. They might even shock you. Taken in the Philippines, they reveal the pre-launch, for inclining and stability checks, of famed boxer Manny “Pacman” Pacquiao’s yacht, The Queen 888.

The yacht has been under construction out in the open at Jotar Ship Building and Repair Services. Located in in General Santos City, the facility shared these photos, as well as many others, to its Facebook page as work progressed. Posted in late December, the inclining and stability-check pictures depict large inflatable bladders cushioning Pacquiao’s yacht as workers pulled and pushed her toward the water. 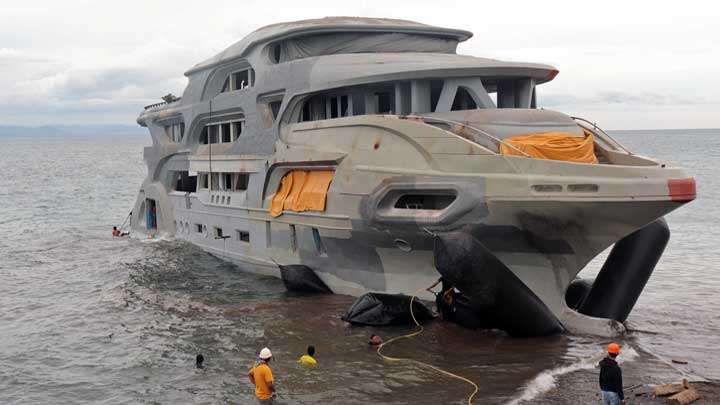 According to vloggers who have chronicled the construction, Pacquiao’s yacht measures 148 feet (45 meters). Among the amenities, the master suite, one of 14 staterooms aboard, has a private alfresco area. A variety of colorful mood lighting highlights relaxation areas throughout. In addition, The Queen 888 contains a “music room.” This may actually be a video karaoke room, since it’s a popular pastime in the Philippines. Outside,  meanwhile, a hot tub sits on the main aft deck. 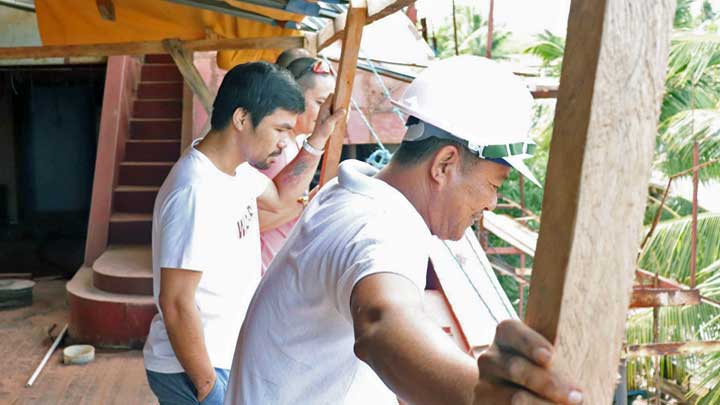 Though Pacquiao, who is additionally a Filipino senator, wasn’t present for the yacht launch, he has previously visited the facility to see the progress. In fact, Jotar Ship Building shared the photo above in May 2018. (Pacquiano is the person in the middle.) At that point, The Queen 888 had about 75 percent of her interior finished, according to the builder.

The shipyard has not indicated when The Queen 888 will be completed. Regardless, she isn’t Pacquiao’s first yacht. He bought an Italian motoryacht for his wife, Jinkee, in 2011. They christened the yacht Sarangani’s Pride, with a Catholic priest on hand. Sarangani is a province in the southern Philippines. It’s further where General Santos City sits.