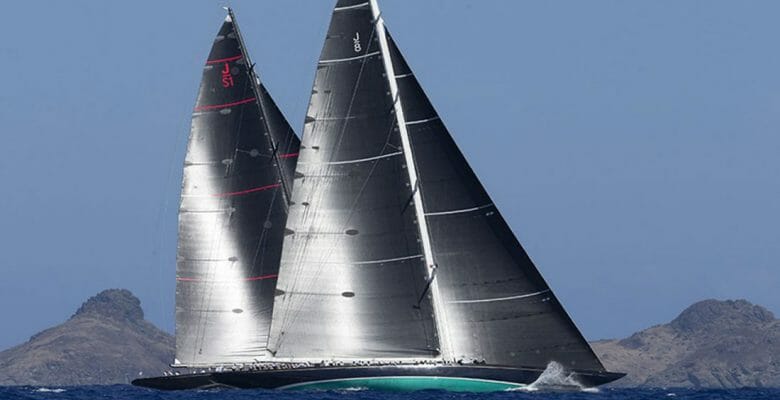 UPDATE, MARCH 24, 2020: A preliminary report, from the J Class Association, states that Svea and Topaz collided because of Svea’s actions. She did not keep clear as she should. It further states Topaz could not avoid the accident.

A historic competition among four J Class yachts ended with an accident. Svea and Topaz collided at the Superyacht Challenge Antigua yesterday. Damage occurred to both yachts, and two crewmembers received injuries.

The Superyacht Challenge Antigua is celebrating its 10th anniversary this year. That alone raised interest in the race. So, too, did the fleet of 15 superyachts and four Js. In fact, there haven’t been four J Class racers competing as a fleet in three years. In addition, all four were set to go head to head again in the St. Barths Bucket, following this regatta.

According to eyewitness accounts, the incident occurred in the last minutes prior to race number one. The collision resulted when Svea hit Topaz aft. She then rose up over and across her fellow J’s stern. A crewmember from Topaz appears to either jump or get thrown into the water, too.

During the final minutes leading into the start of Race 1 for the J Class at the Superyacht Challenge Antigua regatta a collision occurred between Svea and Topaz. Both boats sustained damage and immediately retired from racing. Two crew members have received medical attention. Neither Svea nor Topaz are able to take any further part in the Antigua Superyacht Challenge regatta.

Neither the J Class Association nor the organizers of the Superyacht Challenge Antigua have revealed details about the crewmembers’ injuries. Furthermore, no details are available about the extent of the damage to Svea and Topaz, either.