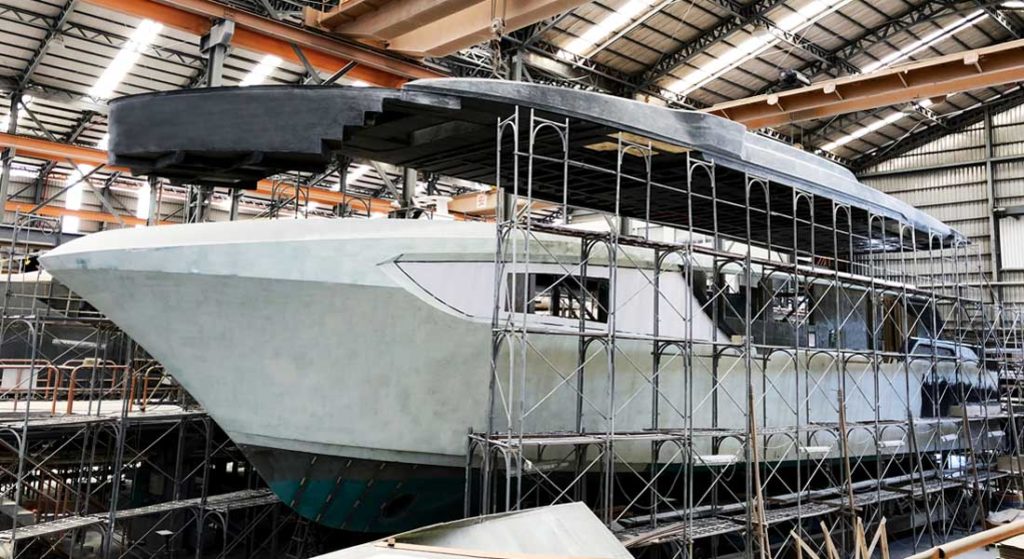 Talk about loyalty. A Horizon client who previously has cruised aboard a Custom Collection (CC) 80, an E84, and an E88 has placed an order for yet another one of its megayachts. This time around, he is planning to take delivery of a Horizon CC98, in 2021. Not only that, but she’ll have space for surprising amenities, like a helicopter and private sub.

A touch-and-go helipad and a sub each require special structural attention. Specifically for the helipad, this Horizon CC98 has an entirely carbon fiber composite superstructure. This bolsters strength while keeping weight down. For the sub, meanwhile, which will sit on the boat deck, the shipyard is shifting the skylounge six feet (1.83 meters) forward. Additionally, the megayacht will dedicate a 4-ton-capacity davit to the sub. Since the owner may keep a big RIB (up to 24 feet/7.3 meters) up here instead at times, the shipyard is also installing a 1.5-ton crane. 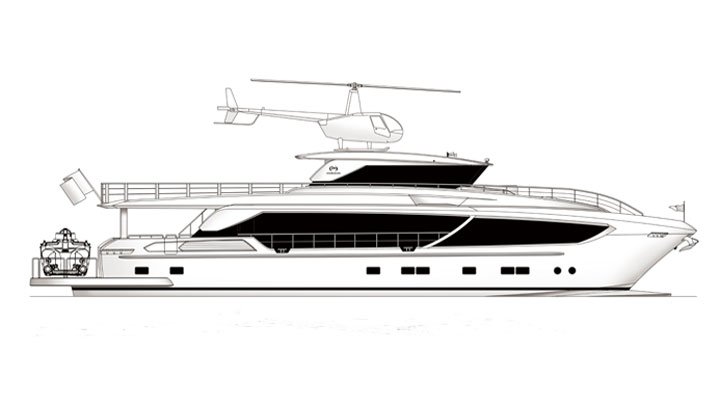 Other notable features include a telescoping mast and radar arch. This is due to low bridges in the Australian waters where the yacht will be based. But, these will come in handy elsewhere, too, since the owner intends to travel to some pretty remote regions worldwide. Inside, meanwhile, the galley will sit where most saloons do, for easier service to the aft-deck dining area. The five-stateroom layout includes a main-deck master suite spanning the 24-foot (7.3-meter) beam. And, to handle air-conditioning, electricity, and other hotel loads, this Horizon CC98 will include a lithium-ion battery bank.

Also on the subject of power, the propulsion system will be flexible. While the megayacht will typically run on a pair of MTU 10V 2000 diesels, sometimes she’ll operate on just one. This will save not just engine hours, but also fuel—even though her fuel capacity is a healthy 6,500 gallons (24,605 liters).