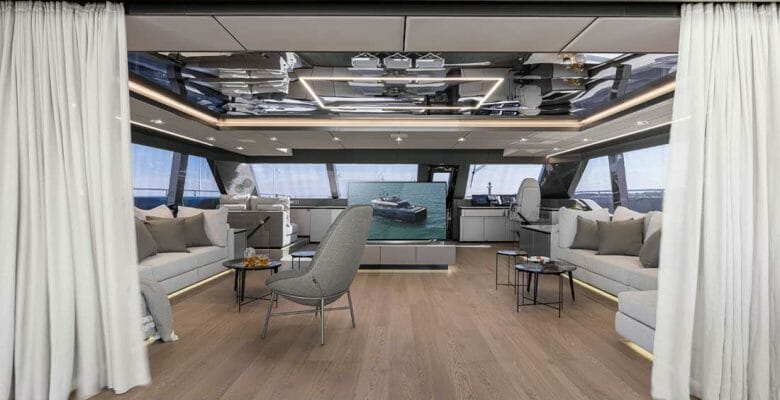 The King of Clay is now the King of Cruising. Tennis champion Rafael Nadal has taken delivery of Great White, his new Sunreef mega catamaran, one month after the project launched. In fact, Nadal’s 80 Sunreef Power saw handover in his home of Mallorca, Spain last week.

The 79-foot (23.95-meter) semi-custom project, announced by Sunreef in 2019, allows Nadal and his wife Maria to pursue travels with friends and family. Naturally, having enjoyed the boating lifestyle since childhood, he wanted to continue doing so. He hasn’t really missed a beat as an adult, either. Just four years ago, for example, he took delivery of an MCY 76, christened Beethoven. (On a related side note, she is for sale, for € 2.2 million.) More recently, Nadal and his family chartered a Sunreef sailing catamaran. As a result, he signed a contract for Great White. 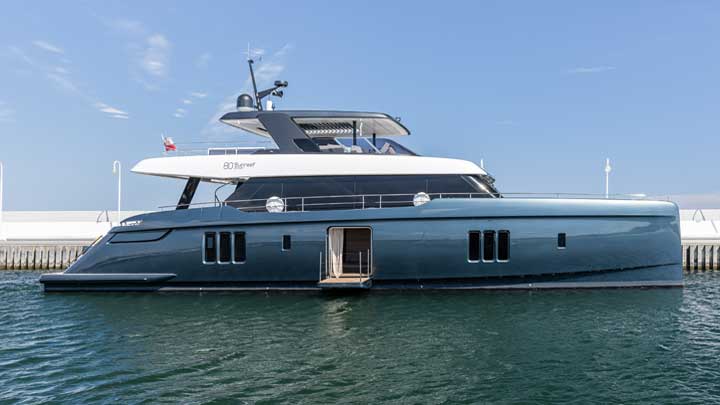 Since the shipyard offers about a dozen interior configurations, Great White reflects a personalized ambiance. For instance, tones of beige, cream, and coffee come together on furnishings to set a peaceful mood. The open-plan main deck includes direct access to the wide, terrace-like area between the hulls forward. Interestingly, Nadal opted to have the master suite below decks, rather than in proximity to this perch. Given the yacht’s 40-foot (12.1-meter) beam, this terrace holds particular appeal. However, Nadal and his wife don’t miss out on private time, since the catamaran has a fold-down balcony off their suite. Three guest cabins accompany their staterooms, too.

Of course, alfresco enjoyment is a central attraction of every yacht, and the 80 Sunreef Power is no different. Notably, her flying bridge, with a bar and barbecue, should see plenty of use. So should the PWC, which stows in a compact garage aft down below.

With upwards of 3,875 square feet (360 square meters) of relaxation space, this catamaran promises a good turn of speed as well. Nadal opted for the most powerful engine package, 1,200-hp diesels, which should deliver a top end of 22 knots. The shallow, four-foot (1.25-meter) draft will make accessing skinny waters simpler, too.

Wherever Great White ultimately cruises, she should be out and about throughout the summer.