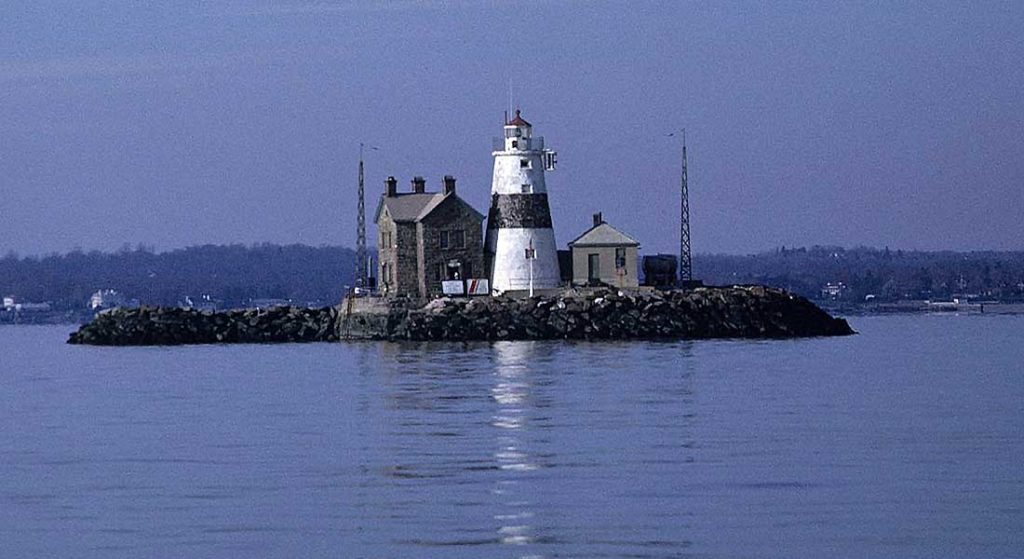 Halloween isn’t just for kids. Many of us grownups like the festivities and fun surrounding it, too. For those of you who further enjoy super-spooky stories, we have some suitably creepy cruising tales to share. These five haunted sites in popular cruising regions should be on your must-visit list.

1. Execution Rocks Lighthouse, New York. This lighthouse in Long Island Sound (above) is on the National Register of Historic Places. Unfortunately, it was also home to executions during the Revolutionary War. British soldiers used to chain prisoners to the rocks at low tide. Meanwhile, during the early 20th century, a serial killer rowed his still-alive victims out here, throwing them overboard with a rock and chain attached. No wonder, then, numerous boaters report hearing ghostly screams coming from the boulders that lend this island its name, amid the calls of seagulls. Additionally, they report hearing the clanking of metal.

2. Ram’s Head Tavern, Annapolis. Among haunted sites in popular cruising regions, the city of Annapolis has several. For instance, a ghost named Amy appears at this popular bar and restaurant, walking distance from the annual Annapolis boat show. The building back in the 18th century was a bar, with rooms upstairs for sailors and prostitutes. Amy was one such working girl. As the story goes, she and a sailor made quite a ruckus one evening, to the point where they and their bed came crashing through the ceiling of the bar. She died from the fall. A bedpost from her bed still sits embedded in the ceiling of the downstairs bar.

3. New River Inn, Fort Lauderdale. Just as Annapolis is among the top haunted sites in popular cruising regions, Fort Lauderdale is, too. In fact, the city is one of the most haunted in the state of Florida. Currently a museum, the New River Inn sits along the well-known New River. It was a hotel for railroad workers in the early 1900s. Numerous reports hold a man wearing a leather duster appears, pacing on the front porch. Other people, meanwhile, say they’ve seen a young girl playing. Yet additional visitors have seen another man, possibly the original builder of the inn.

4. Underground Tour, Seattle. One of the most popular things to do when visiting Seattle is to hit the Underground Tour. It’s the remnants of the city following a huge fire in 1889, after which Seattle rebuilt literally right on top of itself. Abundant apparitions appear in the Underground. For example, one is a bank teller named Edward, who manifests near the former bank vault. You’ll recognize him by his handlebar mustache and top hat. To see even more, take the official Underground Paranormal Experience tour. http://undergroundtour.com/about/paranormal.html

5. Moon River Brewing Company, Savannah, Georgia. No list of haunted sites in popular cruising regions would be complete without Savannah. Some say the Moon River Brewing Company is the number-one haunted location in town. The most frequent apparition is a lady in white, appearing at the top of the stairs. Employees say they’ve had tricks played on them by other ghosts. Furthermore, ghosts apparently toss bottles and push patrons. For even more creepy stories, watch the video above.