You are here: Home / Yachts / Motoryachts / Bering 92 Progressing Toward August 2021 Hand Over

Late summer next year will see the flagship of Bering Yachts’ Exploration Series put her 4,000-gallon (15,142 -liter) fuel capacity to good use. The Bering 92, seen here for the first time, has her owner “as excited as we are,” according to the president and chairman of the yard.

In fact, Alexey Mikhailov of Bering Yachts also says, “the 92 will be a distinctive and welcome addition to the Mediterranean superyacht fleet.” Announced in 2017, the megayacht is an all-custom build. With an LOA of 95 feet (29.08 meters) and a beam of 22 feet (6.74 meters), the yacht is a full-displacement, steel-and-aluminum design. This follows in the footsteps of other Bering Yachts projects. However, the Bering 92 is sporty and more modern instead of traditional in styling, meant to be “truly an eye-catcher,” Mikhailov says. Although interior drawings aren’t available, the shipyard says the interior is similarly contemporary. 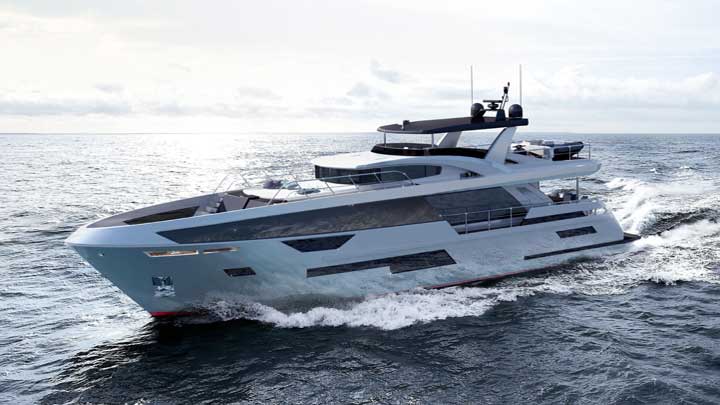 That interior includes accommodations for 10 in the owner’s party, along with four crewmembers. The general layout sees the master suite forward on the main deck, plus two doubles and two twins for family and friends below decks. The shipyard anticipates starting to install all the furnishings in January. For now, though, it is still creating full-size mockups of various rooms.

Regardless, the Bering 92 is ready for other important stages. Hull fairing has begun, for example. Furthermore, major systems like the twin Cummins engines should start arriving toward the end of the year.

Besides the above-mentioned speed, the Bering 92 should achieve a 12-knot maximum speed. Range should be 3,500 nautical miles, too. Shallow areas shouldn’t pose a problem wherever she roams, given a 5’6” (1.7-meter) draft.