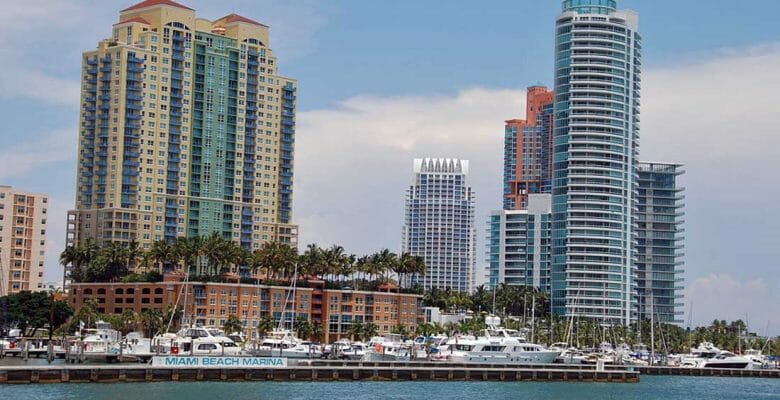 While much attention last week focused on the Presidential election, Miami Beach voters considered three ballot questions about a local marina, too. They rejected some Miami Beach Marina redevelopment plans particularly related to air rights and acquiring more property. However, they also approved a further long-term lease for the site.

A total of three ballot questions focused on the marina. The first question proposed selling air rights above a retail complex there, for $55 million, to develop a 38-story luxury condo building. Additionally, the building would include new office and marina space, along with retail and restaurant space. A one-acre public park would result, too. The condo and related spaces would replace a commercial building, following demolition. Since the city owns the marina, though, it further owns the air rights. Therefore, any sale of air rights, along with changes to the lease, requires voter input. Fifty-one percent of voters said no to selling the air rights.

Another ballot question focused on a further potential condo creation. This time, voters needed to consider the sale of public land at Miami Beach Marina to the same developer. This, too, was rejected.

However, voters did support improvements to the marina itself and extending its lease. Specifically, the Miami Beach Marina redevelopment will see $40 million in enhancements to operations. Furthermore, the city is gaining a one-acre parcel of public park space. Finally, Suntex Marinas, the current site operators, gets a new 99-year lease to run the property. The prior lease between the city and the company was expiring on January 1, 2022. According to information the city provided to voters, “The new lease also includes specific marina standards for a ‘world-class’ marina, with consolidated operations and maintenance obligations.” It adds that the city may bring in an independent consultant to update those standards every 10 years. Fifteen-million dollars of the $40 million in enhancements must be spent within the first decade as well.