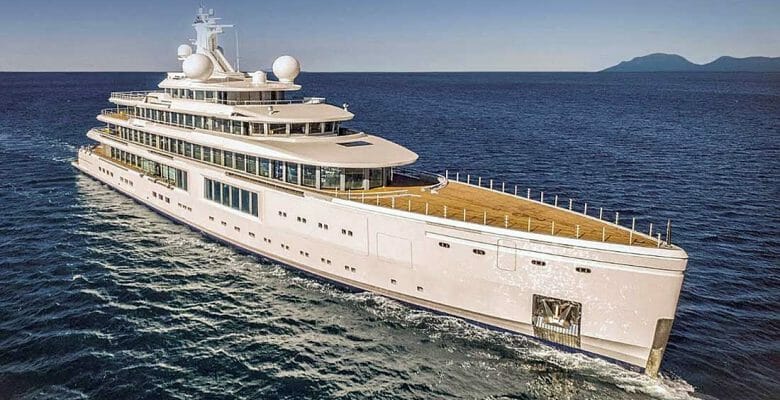 As much as we look forward to the year ahead and the exciting megayachts it promises, we need to take a look back at this year. Certainly, 2020 has seen some spectacularly large deliveries take place. Some have made history for the shipyards delivering them, too. Here are the nine biggest yacht deliveries of 2020, from largest to not-as-large.

Scheherazade. The ex-Project Lightning comes in at 459 feet (140 meters). Greece, Norway, and Middle Eastern waters were on her itinerary following delivery from Lürssen last summer. Although we know her interior design is by Zuretti, Scheherazade still remains pretty secretive.

Luminosity. Boasting about 8,730 square feet (811 square meters) of floor-to-ceiling glass, Luminosity (above) is well-named. She is one of the largest yachts ever to come from Benetti as well, at 353 feet (107.6 meters) LOA. Equally notable, more than 2 million man-hours went into her construction. Furthermore, she is for sale for €225 million (about $275 million at press time).

Moonrise. Three-hundred and 28 feet (99.95 meters) long, Moonrise emerged from Feadship in the late winter. Other than having accommodations for 16 in the owner’s party and “exceptional” crew’s quarters, according to Feadship, she remains quite private.

O’Pari. O’Pari isn’t just among the nine biggest yacht deliveries of 2020. She is the largest-ever project from Golden Yachts in Greece. LOA: 310 feet (94.6 meters). The megayacht entertains the owner’s friends and family as well as charter guests amid a predominantly white interior decor. Particularly unusual, O’Pari has three guest staterooms and the master suite on her upper deck.

Olivia O. She looks more like a commercial vessel (above) than a yacht. However, the 290-foot (88.5-meter) Olivia O is definitely a pleasure craft. Her owner purposely approached Ulstein, a Norweigian shipbuilder focused on ferries, offshore energy vessels, and other ships, for construction and naval architecture. He also hired Espen Øino for styling and the general arrangement. Unfortunately, details remain confidential.

Avantage. Yet another delivery from Lürssen this year, and yet another yacht who had a code name under construction. Avantage went by Project Hawaii. This 285-footer (87-meter) features styling by Bannenberg & Rowell. While she’s back in Germany for the winter, she spent her first summer in Turkey and France, among other Med destinations.

Sea Eagle II. The sole sailing superyacht on our list of the nine biggest yacht deliveries of 2020, Sea Eagle II (above) belongs to a repeat Royal Huisman client. He stepped up from a 141-footer (43-meter) to this 266-footer (81-meter). Meant for cruising his home Asian waters as well as the world, she carries more than 37,674 square feet (3,500 square meters) of sail area.

Artefact. Bearing an amazing 70 tons of glass, Artefact has equally astonishing window shapes, previously never seen on a yacht. Naval architect Greg Marshall says their captain saw the design, part of an office-wide concept competition, a few years ago and shared it with the owners. Clearly, they loved it, and Nobiskrug brought it to fruition. LOA: 262 feet (80 meters). 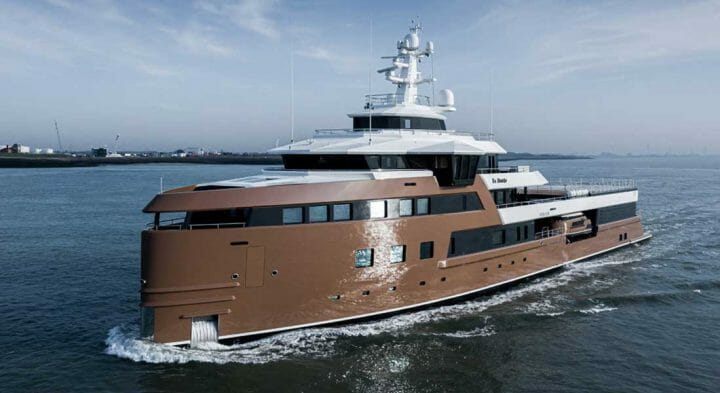 La Datcha. What better to round out our list of the nine biggest yacht deliveries of 2020 than another unusual project. This 252-foot (77-meter) megayacht (above) is purely for exploring some of the most remote places on earth. Specifically, the owner wanted to “set out on the journey of a lifetime to places others can’t reach,” in his own words. Therefore, her itinerary includes heli-skiing in Kamchatka in far eastern Europe and diving (including aboard her sub) in Papua New Guinea.

One final comment: Note that REV Ocean is not included. Despite some media insisting on calling her the world’s largest superyacht, the 602-footer (183.6-meter) is not a yacht. She’s a research ship.