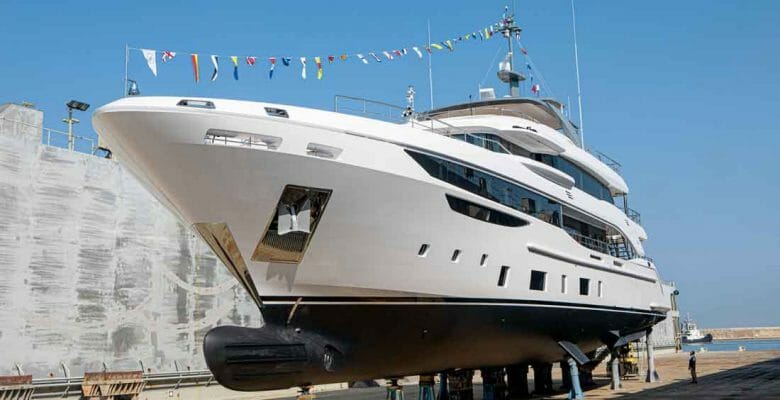 More cruising consumers are turning to one of Benetti’s most recent semi-custom series, the Diamond 145. Buyers signed on for hull number four in December.

An entirely fiberglass megayacht, the 145-footer (44.06-meter) springs from the drawing boards of Giorgio M. Cassetta. Cassetta is responsible for most of the Italian shipyard’s semi-custom and custom builds. While the Benetti Diamond 145 therefore bears a family resemblance, she presents coveted different features. A good example is the abundance of glass, specifically covering 80 percent of the upper deck.

Since the Benetti Diamond 145 is semi-custom, the owners are working with the Interior Style Department of the shipyard for the general arrangement and decor. So far, the only public detail is the stateroom total, six, for 12 guests. Regardless, the 456-gross-ton yacht does have a main-deck master suite, in keeping with current trends. It has a privileged footprint, too, 646 square feet (60 square meters). Additionally, the shipyard claims the Benetti Diamond 145 has one of the largest sundecks in her size range, about 1,100 square feet (102 square meters).

Hull number four will see delivery in time to cruise in the summer of 2022. Top speed should be 14 knots with twin MAN diesel engines. Best range of 5,000 nautical miles should come at 11 knots, too. Finally, the builder is installing an air-treatment system that exchanges interior air six times each hour. Benetti is including this system, which further filters dust particles, on all of its megayachts in the future.