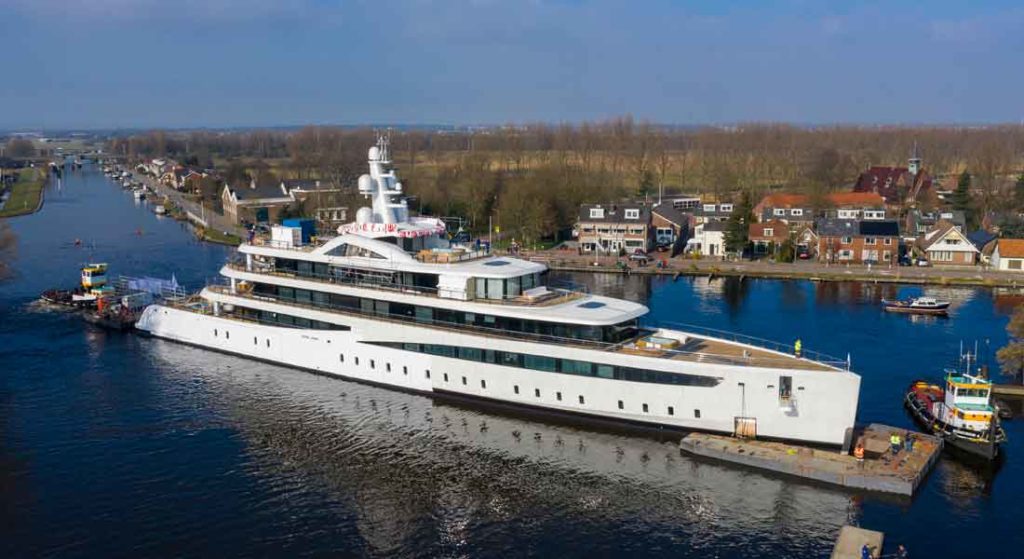 Stepping up from a 203-footer (62-meter) to 308-footer (94-meter) megayacht is a significant jump. But, it’s one that the owner of the somewhat still confidential Feadship Project 817 clearly felt comfortable taking. His new yacht celebrated her official launch late last week, ahead of delivery in several weeks. Equally noteworthy, she features diesel-electric propulsion and other power-consumption-minded machinery.

Seen for the first time last October, the megayacht is his second Feadship. He was already quite familiar with the builder, however, having chartered “virtually every Feadship available in the global fleet over recent years,” it says.

Bearing a beam of 46 feet (14 meters), Feadship Project 817 also bears styling by Feadship’s own De Voogt Naval Architects, as well as Azure Naval Architects. The prominent use of glass complements a beach-house-like interior by the New York-based Peter Marino Architect firm. But, the significant amount of glass—which further is structural, due to no bulwarks between the panes—also means high air-conditioning demands in warm climates. Therefore, the build and design teams researched options that simultaneously draw lower power. Feadship Project 817 employs proven techniques like waste-heat recovery for a number of systems, for instance.

For lower reliance on gensets, the megayacht additionally has a large battery bank, due to the above-mentioned hybrid propulsion. Furthermore, that system should let her cruise at 12 knots, especially in sensitive regions she plans to visit. In traditional full-diesel mode, meanwhile, she should see 20 knots of maximum speed. Feadship has not yet disclosed horsepower or other factors related to the propulsion system.

The shipyard does say, though, that it will reveal more details, including her name, following sea trials. For the time being, it also shares that the pearl-white yacht follows the owner’s preference for clean lines. This extends down to the lack of hinges on all exterior doors and hatches, for example. In fact, all exterior doors slide open electrically. Additionally, they’re flush to the superstructure, lacking handles, too.