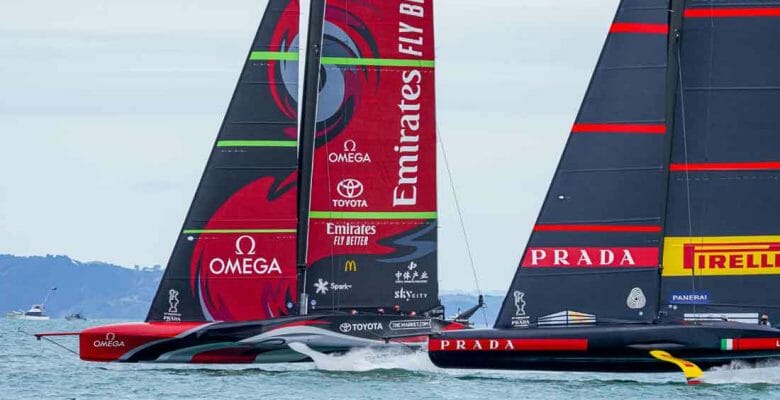 Covid restrictions have dramatically reduced the number of megayachts permitted to enter New Zealand. Pre-pandemic, local marine-industry trade representatives anticipated more than 150 would come. Even with less than two dozen receiving clearance, the superyachts at the 36th America’s Cup comprise a pretty impressive fleet. Here are some of them.

Hampshire. A 217-footer (66-meter) from Feadship, Hampshire originally bore the name Vanish at launch (below) in 2016. She’s been in headlines in New Zealand, since she belongs to Andrew Currie, tied to Ineos Team UK. (Team Luna Rossa Prada Pirelli knocked the team out of Cup contention in late February.) Currie provided media interviews after he and his family, as well as his crew, completed quarantined onboard well in advance of racing.

Odyssey. Launched as part of the Princess 40M series, this megayacht has been unmistakable over the years due to a bright turquoise paint job, including her domes.

Promise. Stretching 167 feet (51 meters), neither Promise nor the other superyachts at the 36 America’s Cup will encounter icy waters. But, that’s among the conditions her owners intended to cruise. In fact, Promise is Feadship’s first ice-classed project, from 2018.

Sherpa. Yet another Feadship, Sherpa is unmistakable, too. She is far more rugged-looking than typical for a private yacht. The 241’5” (73.6-meter) yacht has something in common with the Sherpa people of Tibet. Just as they’re famous for their mountaineering-guide skills, the yacht is famous for guiding her owner and guests on global adventures with a plethora of tenders and vehicles. 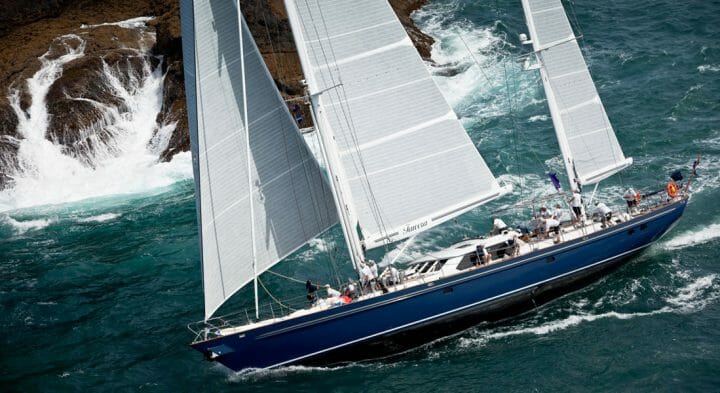 Tawera. Tawera (above) is no stranger to New Zealand waters. She’s also no stranger to racing, having taken the New Zealand Millennium Cup several times. Furthermore, she just won the MasterCard Superyacht Regatta, an event during the current America’s Cup. LOA: 92 feet (28 meters).

Silvertip. This 111-footer (33.8-meter) came in a close third in the MasterCard Superyacht Regatta. Silvertip is additionally a frequent sight in New Zealand. Like Tawera, she, too, regularly participates in the New Zealand Millennium Cup.