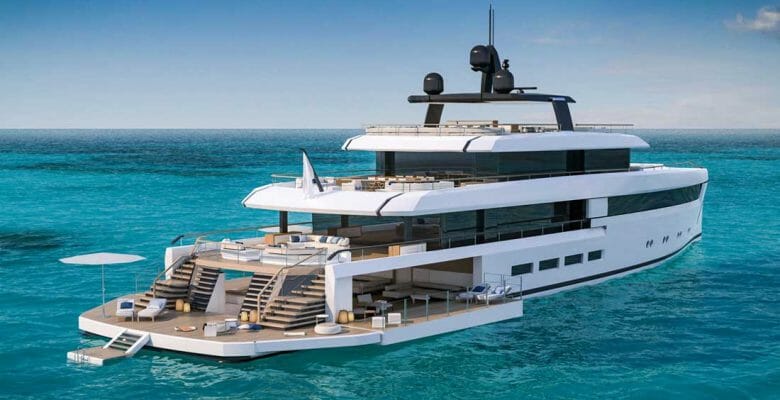 Sometimes when owners want more space, they don’t necessarily want a larger yacht. Nauta Design has had conversations to this effect with several of their customers, in fact. This, therefore, inspired the studio to create the Nauta 54m Wide, with a wider-than-average 36-foot (11-meter) beam. The megayacht additionally has a surprising layout to make better use of space.

“The basic concept behind the Nauta 54m Wide started with requests from clients who wanted plenty of room onboard to accommodate a family in comfort, but not a yacht that was too big too moor in picturesque places like St. Tropez or intimate bays in the Balearics,” explains Mario Pedol, the studio’s co-founder.

One of the first things the studio did, with the naval-architecture studio NAMES, was reconfigure the location of the diesel-electric propulsion system and other engine-room machinery. Instead of all being in one room on the lower deck, they’re mostly on an under-lower-deck. The subsequently freed-up space on the lower deck now has six guest staterooms, one of which can be a gym or a spa. 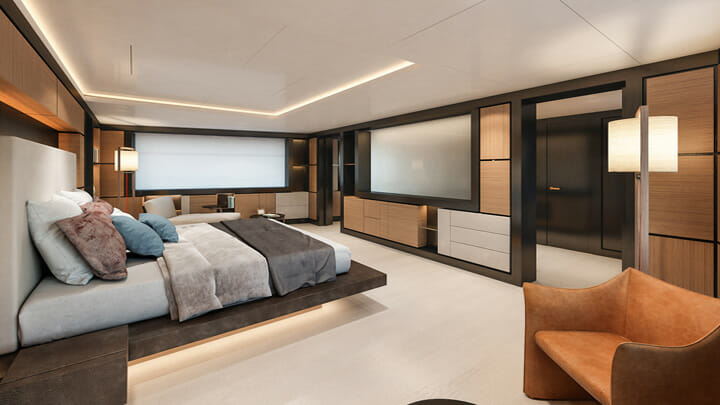 Speaking of staterooms, more are unexpectedly positioned on the main and upper decks. On the main deck, a VIP sits opposite the galley (and near the 807-square-foot/75-square-meter master suite). Alternately, it suits kids or staff. On the upper deck, meanwhile, the first officer has a cabin, in addition to the captain. The two conveniently have access to the ship’s office. All of this is rare to find on a megayacht of this size. The skylounge may lose a little floorspace as a result, but it is nevertheless a welcoming intimate room, for TV or movies. And, of course, owners and guests prefer spending time outside, so the open deck area here has a dining table.

Maximizing outdoor enjoyment, the Nauta 54m Wide features the studio’s patented system nicknamed The Island. It’s a familiar assembly of opening platforms on three sides of the transom. When the watertoys and tender immediately inside are in the water, the interior and platforms combine to create a big beach club.

Initial engineering for the 800-gross-ton megayacht is already complete, from the 1,475-square-foot (137-square-meter) sundeck to the under-lower deck. Of course, the Nauta 54m Wide can develop further with customer input for a contract to put out to bid with shipyards.