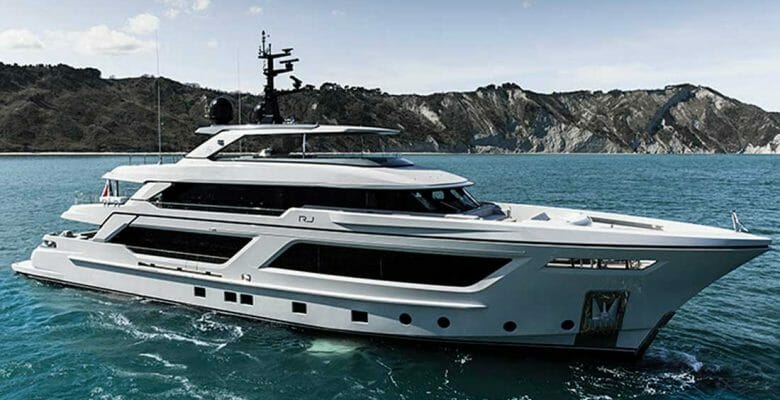 The notion of go-anywhere globetrotting tends to call to mind rugged adventures. Probably one of the last things anyone would imagine going hand in hand with this, though, is a genteel ambience. However, RJ the explorer yacht, from Cantiere delle Marche, marries the two seemingly opposite notions together, seamlessly.

Made for embarking on adventures, RJ is for an experienced cruiser who eagerly anticipates spending significant time at sea. Interestingly, the owner acquired the yacht while she was still in build, from yet another avid adventurer. That client commissioned Francesco Paszkowski Design to give RJ the explorer more of an RJ the cruiser look, if you will. Not coincidentally, Paszkowski’s studio had penned the lines of his four prior yachts, each more traditional motoryachts.

The current owner saw no issue with a more customary profile essentially clothing his adventure yacht. Furthermore, he clearly had no issue requesting that the interior decor was polished and sophisticated. Therefore, Paszkowski and Margherita Casprini combined a variety of glossy and matte woods, leathers, metals, and other materials. Light and neutral tones strike contrasts with rich, deep tones, and different textures do similarly.

If you’ll be attending the Cannes Yachting Festival in about two weeks, you can get aboard RJ and explore her urbane decks. Get a taste of what to expect in this video. Especially note the rosewood and leather panels, brushed oak on soles and walls, and matte-finished rosewood furnishings.