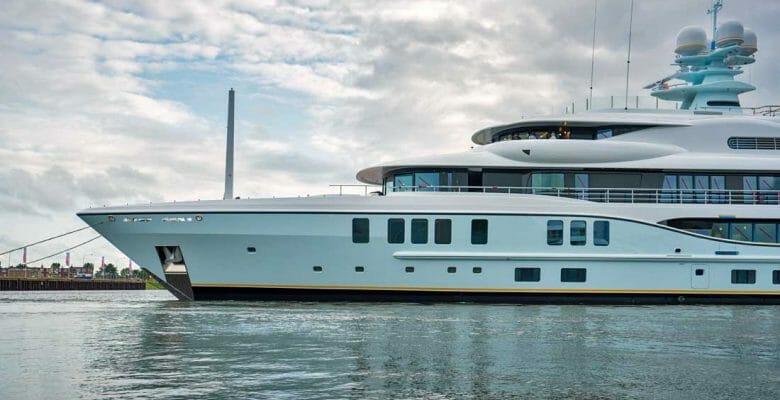 Owners who acquired an Amels 242 started on spec are close to taking delivery. Their yacht, nicknamed Project Shadow, just launched in The Netherlands this week. While she’s the sixth in the Amels 242 megayacht series, she asserts her own style, starting with her hull color.

The ice-blue paint job is just one of several personalized requests that the owners made. They collaborated with Winch Design to ensure the dedicated owners’ deck, for instance, suits their private time. Its alfresco areas include a hot tub fully forward. The nearly 41-foot-beam (12.46-meter-beam) megayacht overall caters to an owners’ party of 12. Three of the guest staterooms are below decks, while two voluminous VIPs sit on the main deck. Details on the woods, marbles, and other decorative materials, however, are not available. 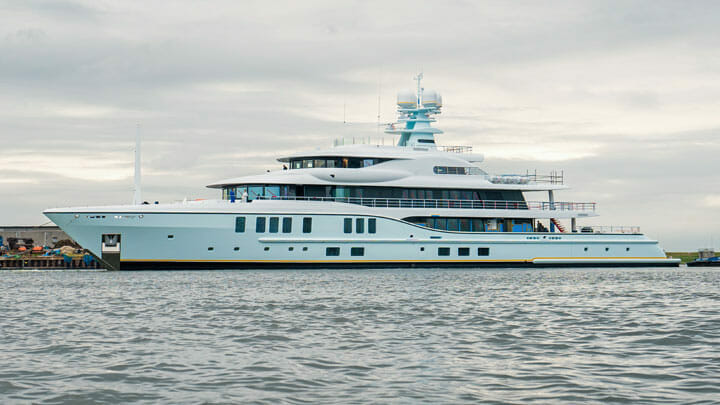 Regardless, Rose Damen, Damen Yachting’s managing director, points to the swiftness in which Project Shadow got to this point. Back when the yacht sold, in fact, she commented, “We have a very challenging project to achieve all the owners’ requests in a short time frame.” Delivery was set for this fall. Despite the tight timetable, due to the Amels 242 being at an advanced stage and, of course, the shipyard having delivered several already, she added, “I’m extremely confident that we will deliver another beautiful Limited Editions yacht on time and on budget for her owners.”

While Project Shadow is, as mentioned above, the sixth Amels 242 so far, four have seen delivery. Just after New Year’s Day, in fact, Synthesis departed The Netherlands as that fourth delivery. Perhaps coincidentally, about a week after Synthesis’ delivery, Damen Yachting announced the sale of this particular project.