Home / Yachts / Spirit of Romo: The Soul of an Explorer 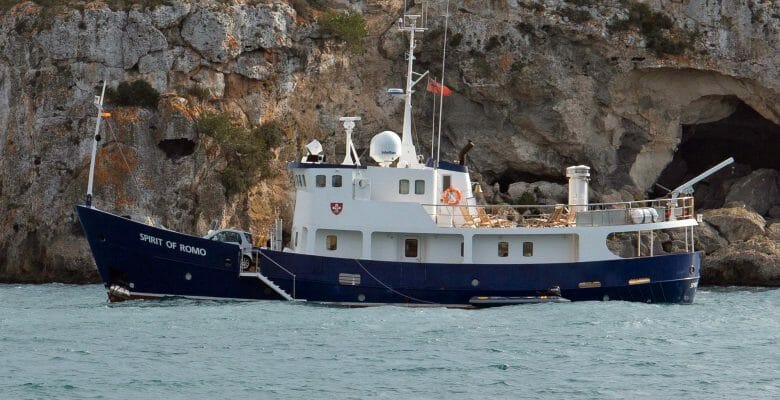 Editor’s note: Stemming from her days as a fisheries-protection vessel in Arctic waters, Spirit of Romo isn’t a typical 84-footer (25.85-meter). This article is from an interview that Capt. Ian Woolcott, who runs Spirit of Romo, provided to YPI, which has the yacht listed for sale.

Q: Can you tell us a bit about the history of the yacht?

A: Spirit of Romo spent approximately 30 years in the Royal Danish Navy as a fisheries-protection vessel (below). She was based in Arctic waters in Greenland, before being decommissioned by the navy and bought by an English gentleman, who planned to convert her into a private yacht. Sadly, he passed away, so the conversion never happened, and Spirit of Romo was left in Poland for many years. I’d seen the vessel a number of times and always really liked her.

Fast forward a few years. I was the captain of a charter vessel in Scotland. The current owner of Spirit of Romo chartered the yacht with his wife and friends for 10 days. He told me he had always dreamt of owning a yacht. However, he didn’t want fiberglass; he wanted a proper ship! I had the photos of Spirit of Romo in her naval condition on my laptop, so I showed them to him. In his words, Spirit of Romo was a “real ship,” and the fact she was an ex-warship really appealed to him. By the end of the trip, he had purchased her. He had never seen the yacht, but I knew the seller and the vessel quite well. We then traveled to Gdansk in Poland to see the boat, then took Spirit of Romo to a shipyard in The Netherlands to start the refit.

Q: Can you tell us a bit more about the refit and the technical upgrades that took place?

A: Making the vessel the best she could possibly be was the priority over the budget. The vessel was stripped down until all that was left was the hull. We then started to rebuild her, with a new superstructure, new engine—new everything basically! Spirit of Romo is a true oceangoing vessel. I typically describe her as a very big little ship!

Q: What type of buyer would best suit a yacht like Spirit of Romo?

A: Somebody who is up for an adventure, enjoys discovering new places, or who wants to circumnavigate the world. She’s ice class, so the next owner has no limitations in terms of cruising areas.

Q: What are the yacht’s standout features?

A: The Veem gyro stabilizer is hands-down one of my favorite features. It makes life onboard so comfortable. It stops the boat rolling when at anchor, and you can sit comfortably in much heavier weather.

Believe it or not, the bridge (below) is one of the most popular places to gather. It is perfectly suited for guests, with nice seating and great panoramic views. The spec of the bridge is incredibly high. I was told to put whatever I wanted on the bridge, so I did! She is a little ship with a big-ship system.

The aft deck is also popular, as it features a roof, which can protect you from the elements and still allow you to appreciate the scenery and be outside.

Q: What sets her apart from other yachts?

A: Her seakeeping ability is definitely her prize feature. The yacht was designed by the Danish Navy for a reason. We have crossed the Bay of Biscay many times in conditions that would normally be too much for a boat of her length. But she has no problem at all handling the challenging elements.

Q: Any fun facts about Spirit of Romo?

A: We used to have a Smart Car on the foredeck with a large crane, so the owner always had access to a car if he needed it.