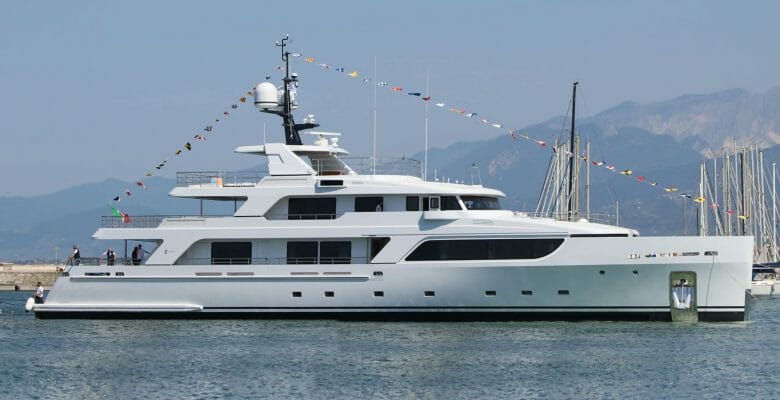 The morning of May 19 was extra special in one particular part of Viareggio, Italy. While her owner and his family looked on, Boji launched into the sea. The celebration involved the shipyard workers who contributed to her design and construction, too.

The 141-footer (43-meter), a.k.a. Codecasa F77, is part of the Codecasa 43 series. This means she’s a full-displacement design, with a steel hull. It also means that all design, from naval architecture to styling, comes from Codecasa’s in-house team.

Coming in just below the 500-gross-ton threshold, Boji has a 29’5” (9-meter) beam. The shipyard hasn’t revealed whether the owner wanted an overall traditional interior layout or something quite distinctive. Regardless, the sleeping areas might lend a hint. The master suite sits forward on the main deck, while all the guests have their accommodations below decks. Two of the four guest staterooms are twins with Pullmans, too.

Sea trials should confirm a top speed of 16½ knots under Caterpillar power. Expect the yacht to have a best range of 4,000 nautical miles at 11 knots as well.

While Codecasa prepares Boji for delivery, it’s simultaneously building two more megayachts. Each is further a spec project. C124 is the same size as Boji and began construction last month. She’ll be complete in 2024. C127, meanwhile, measures 190 feet (57.8 meters) and will be especially notable for her performance. The shipyard says she’ll hit a top speed of 21 knots. Look for delivery sometime next year.