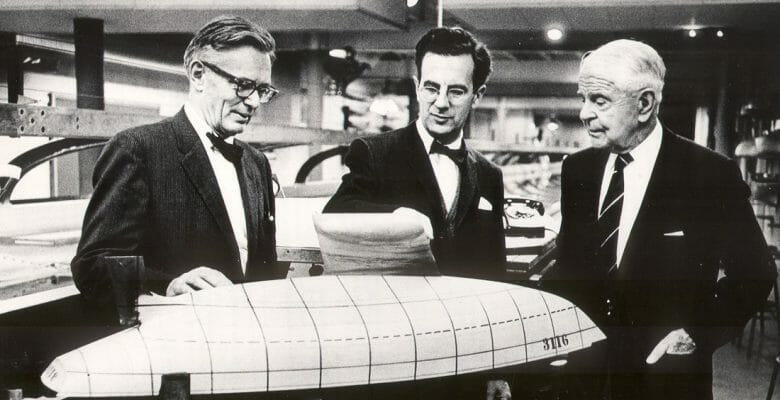 Living to be 100 years of age is an accomplishment in itself, but Stephens lived a life of triumph. He enrolled in the Massachusetts Institute of Technology in 1926 but was forced to drop out during his freshman year due to illness. Despite his lack of training in mathematics and engineering, he had the natural gifts of observation and intuition. Two years later he was working at a drafting table at home in Massachusetts teaching himself how to draw plans, keeping a copy of The Elements of Yacht Design close at hand.

That same year, at just 21 years of age, Stephens partnered with Drake Sparkman, a yacht broker, to start a firm specializing in naval architecture, yacht brokerage, charter, and insurance. Sparkman & Stephens, as they named the company, went on to design more than 2,700 commercial craft, military vessels, and pleasureboats, eight of nine winners of the America’s Cup between 1937 and 1980, and some of the most famous motoryachts and megayachts around. If you’ve ever seen Dorade, Stormy Weather, Ranger, Intrepid, and/or Anson Bell, then you’ve seen the genius that was Stephens.

Even though Stephens retired in 1978 and moved from New York to New Hampshire, he remained an active, passionate boater. When 15 participants in the 1979 Fastnet Race died due to a storm and many of the boats capsized as well, he wrote, “Some modern ocean racers, and the cruising boats derived from them, are dangerous to their crews.” Over the course of the next few years, he oversaw a study of the causes of capsizes by keel boats, cosponsored by the United States Yacht Racing Union and the Society of Naval Architects and Marine Engineers. The study spawned several reports and a book, Desirable and Undesirable Characteristics of Offshore Yachts, to which he contributed two articles.

In addition, Stephens taught courses in sailing for engineers at Dartmouth College, served as an advisor to America’s Cup syndicates, and attended conferences for international rating rules committees. Flying around the globe is tiring enough for those of us in our 40s, but Stephens was still doing all of this and more in his 90s. Even more impressive, he crewed aboard Dorade for a few races in 1998 when a new owner bought her and restored her.

“I was lucky: I had a goal. As far back as I can remember I wanted to design fast boats.” So wrote Stephens in his autobiography All This and Sailing, Too.

You did that and so much more, Olin. We’ll miss you.