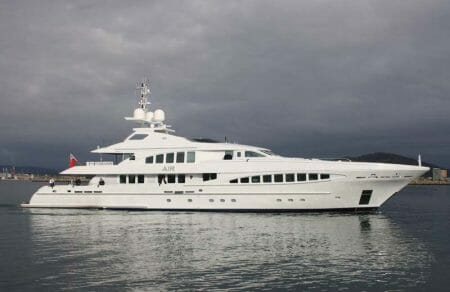 The 47-meter superyacht series at Heesen Yachts that started with Yalla in 2004 keeps going strong, with the hand-over of the sixth launch, Air. She’s pictured in Gibraltar, photographed in the early morning hours of Christmas.

Measuring 46.7 meters (153 feet), Air features the familiar family styling from Omega Architects and Heesen’s in-house team. Omega Architects also handled interior design, creating a contemporary atmosphere emphasizing black and white, though with a handful of colors and other warm-tone elements. In terms of color, there’s a creative use of frosted lights, each a different gemstone shade, embedded in a leather column in Air’s central atrium. Woods like light-tone Japanese elm and dark-grained American walnut strike a nice contrast, too.

Layout highlights include four guest staterooms on the lower deck, with one being a full-beam VIP stateroom, just like the main-deck owner’s suite. One of the guest staterooms has twin beds that can be pushed together to form a double, plus pullmans if extra friends or family are aboard. But chances are, everyone will spend far more time in the upper deck’s theater. Imagine the fun of watching flicks on a 103-inch, high-definition, plasma screen, with seven-foot-tall speakers and a surround sound setup pumping out the heart-pounding action. The owners or the crew (eight in total) can change from comedy to drama with a swipe of a finger on the iPad customized as a controller. Crestron controllers are also hooked up.

Heesen has three additional 47-meter yachts under construction, with one to be delivered next year and the other two to be handed over in 2012.