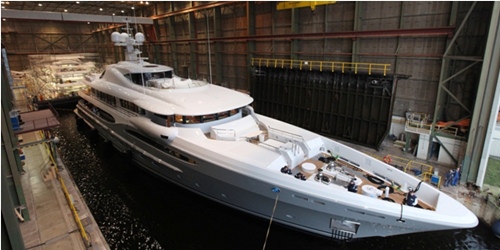 Amels marked a significant milestone in recent days, with the launch of its largest Limited Editions series.

The Limited Editions Amels 212 is an extension of a semi-custom concept that began with the Amels 171, which was introduced in 2005. Like the 171 and her slightly larger sister, the 177, the Amels 212 is styled by Tim Heywood. But even though there’s a family look to the exterior, the similarities end there. Owners have the ability to personalize the general arrangement. It’s more freedom than some semi-custom superyachts offer, and it’s undoubtedly in a size range that other builders are not offering.

For example, spread among the five decks of this first Amels 212 are a handful of alfresco relaxation and dining spaces, all teak-decked. Inside, Andrew Winch Designs is overseeing the outfitting of the main-deck master, four lower-deck and two bridge-deck guest suites, lounges, and more. The bridge-deck VIP staterooms are notable for featuring balconies, accessible via sliding glass doors. The friends or family accommodated here, and elsewhere, can access all parts of the yacht via a glass elevator. It even extends up to the sundeck, where there’s a gym, steam room, and a pool with a swim-up bar. Of course, like many megayachts these days, the Amels 212 also includes a beach club and a garage for tenders (up to 8.5 meters, or about 28 feet) and watertoys.

Though it’s too difficult to see in the photo, Amels actually has the second 212 under construction, right behind this one. She’s anticipated for launch in about a year’s time and will feature an entire deck devoted to the owner. On a related note, these are just two of 10 yachts under construction at Amels at present.

Look for the first Amels 212 to debut at the 2011 Monaco Yacht Show. In the meantime, even with her marking a major milestone, she won’t remain the largest for too long: There’s a Limited Editions Amels 242 in the works, too.

UPDATE: For a virtual-reality tour, see the Amels 212 video.