Home / Yachts / Motoryachts / Drizzle Launches at Feadship, in the Drizzle 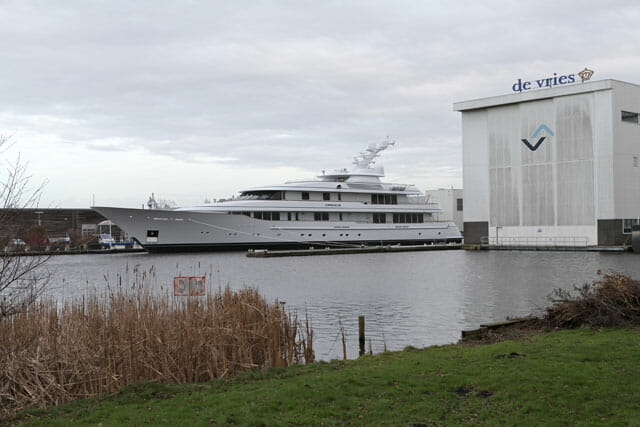 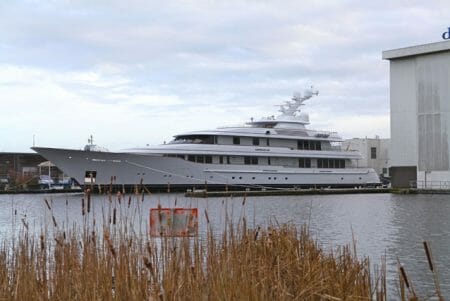 Not even rain could dampen the spirits of repeat Feadship owners as their new Drizzle launched this weekend at Royal De Vries’ shipyard.

Having purchased the Feadship Twizzle on the brokerage market in early 2008, the owners liked her styling and general layout. As much as they liked the megayacht, which they re-christened Drizzle, they knew they wanted to build one, too. In fact, Henk De Vries, managing director of Royal De Vries, says they began planning the new Drizzle together within just a few months of taking delivery of Twizzle.

Drizzle is longer than her predecessor, 221 feet vs. 182 feet LOA (67.27 meters vs. 55.5 meters, respectively). She’s also beamier: 37’5” vs. 32’9” (11.4 meters vs. 10 meters). However, she has the same naval architecture and interior design teams, namely De Voogt Naval Architects and Redman Whiteley Dixon. And those teams ensured she’d pay homage to the megayacht that inspired her creation, while giving her some features all her own. If you compare the profiles of the two megayachts, you’ll see some similarities. As for differences, Drizzle has a central staircase, for both the owner’s party of 10 and the crew of 18 to use, leading to the sundeck. There’s also dedicated stowage for toys ranging from tenders to PWCs and kayaks.

While no images are available yet for the interior, Drizzle’s captain, James Duggan, says the crew’s quarters are particularly nicely executed. “This reflects the owner’s concern for crew welfare and a wish that their facilities should be finished to the highest possible standard,” he explains.