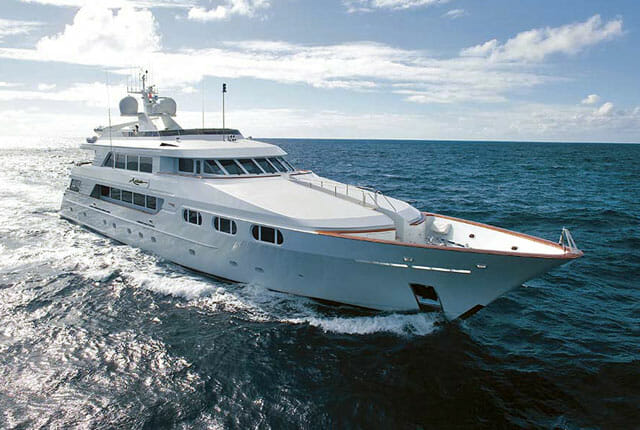 A seven-month refit has made Attitude, most recently known as Encore, ready for her current owners’ cruising preferences as well as the charter market.

Attitude was built by Trinity Yachts in 1998 as Noble House. The 150-foot (45.7-meter) megayacht went through several name changes in the ensuing years. Her current owners acquired her earlier this year. They had Attitude taken back to Trinity Yachts’ New Orleans facility for the work. The choice was easy, given that they had previously owned two other Trinity-built boats. Specifically, they cruised aboard Relentless, a 142-footer from 2001, and Zoom Zoom Zoom, a 161-footer originally delivered in 2005.

Attitude still has four guest staterooms below decks and a main-deck master. All have upgraded entertainment system options, as does the rest of the yacht. It’s the Apple AirDrop/AirPlay system. AirDrop allows users to share files, including music and photos. AirPlay, meanwhile, permits streaming video and music. The entertainment system also includes Crestron controllers.

Attitude is available for charter this winter for $140,000 per week, plus expenses. Her base for the winter will be St. Maarten. You can arrange a tour at next week’s Fort Lauderdale International Boat Show, where she’ll be on display at Pier 66 with International Yacht Collection, her central agent. Among the watertoys charter guests will get to use are four PWCs. Attitude will also tow a 32-foot Intrepid kitted out for fishing.