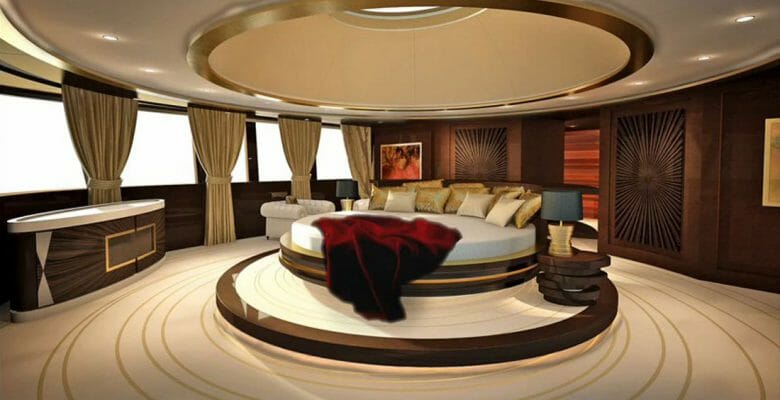 Since Skyfall was announced at Sunrise Yachts about a year ago, the 19th James Bond-themed megayacht commissioned by famed yacht owners John and Jeanette Staluppi has attracted a lot of attention. So, since Sunrise and the Staluppis are seeking new buyers for Skyfall—the Staluppis have another yacht on their hands at present—there’s new imagery available to entice even more interest.

Skyfall, at 221’5” (67.5 meters) LOA, is the largest build for Sunrise Yachts. She features styling and naval architecture by A. Vallicelli & C. and Mulder Design, with interior design from Focus Yacht Design. If you’ve seen any of the Staluppis’ previous yachts, you’ll recall they’re quite lavish. Skyfall follows suit. The images in this video—more like a mini-movie—weren’t released to the media when the project was initially announced.

The video takes you from Skyfall’s aft decks throughout the interior, for 12 guests. You’ll see the main aft deck, featuring a glass-fronted pool further fitted with sunpads, plus a bar. There are plenty of seating areas here and on the upper decks to take in the views, too. The best views, though, come inside, where there’s eye-candy galore. Skyfall features a number of stone selections, some further inlaid—including in indoor-outdoor areas like aft-deck seating spots. Other decor treatments include high-gloss woods and photos as walls of art. The latter is particularly true in the central spiral stairway connecting all of the decks. Just like previous Staluppi megayacht projects, Skyfall has alluring damsels. There are also images of trailing bubbles beneath the ocean’s surface.

You’ll get further good looks at the owners’ suite, a circular aerie high atop the yacht. The bed itself is circular, too, with a complementary-shaped skylight above. The bed is positioned as if on a pedestal, letting the passing scenery out the forward ports be appreciated without having to get up.

For alternate views of Skyfall, watch this video as well: