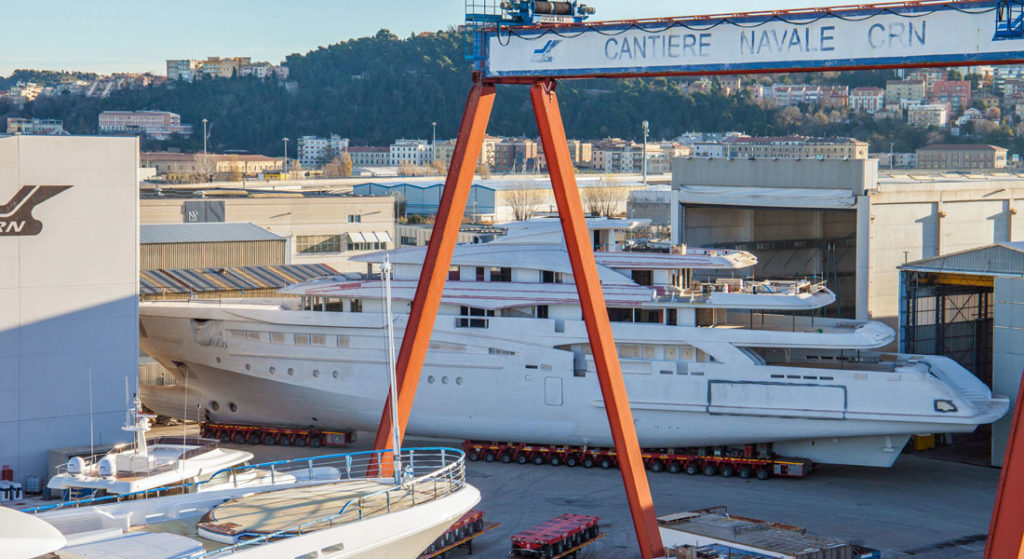 On first thought, it may seem pretty simple to pick up an object and move it just 2,600 feet. But, it’s not so easy when that object is a 259-foot megayacht. CRN had to do this recently, with hull number CRN 135.

The project transferred from one build shed to another, since additional stages of construction are occurring. CRN 135, which will launch later this year, is the Italian yard’s second-largest project. Chopi Chopi, measuring 262 feet, holds the distinction of being the biggest.

For a better idea of her dimension, consider that CRN 135 has a beam of 44 feet. Volume is also significant, at more than 1,000 gross tons. Furthermore, the megayacht rises five decks high. CRN says its team spent two hours maneuvering the massive megayacht those 2,000-plus feet.

The shipyard is keeping a lot of the particulars about CRN 135 close to the vest. This has been the case since CRN announced the project in March 2014. Thus far, we know that 10 guests get five VIP staterooms for their use, accompanying the master suite. The crew complement is quite large, 39 people. Laura Sessa is responsible for interior design. Overall, her clients tend to have contemporary taste, preferring light-tone backdrops.

Studio Zuccon International Project has styled the yacht to look slender, despite her height and volume. In addition, CRN’s in-house naval engineers are equipping her with features pioneered by the yard’s previous builds. However, the shipyard hasn’t specified what those features are.

In related news, the shipyard is preparing for the launch of a 243-footer. That will take place this month.