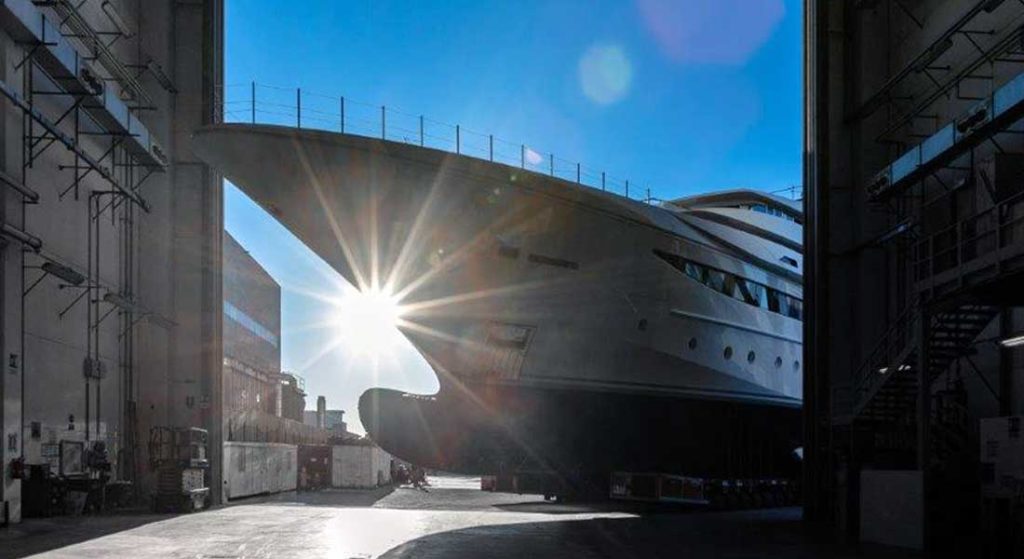 The second-largest CRN maneuvered to her launch ramp over the past several days. Measuring 259 feet (79 meters), the still-confidential CRN 135 made quite the impression as her five decks came into view.

Scant details are available, even with this being three years following initial word. In fact, back in 2016, all CRN would reveal image-wise was part of her hull. The shipyard did say, though, that the megayacht would cater to an owner’s party of 12. In addition, it added, CRN 135 would accommodate 39 crewmembers, making for an enviable crew-to-guest ratio.

With styling by frequent collaborator Studio Zuccon International Project, and bearing interior design by Laura Sessa, CRN 135 has a commodious beam of 44 feet (13.5 meters). The shipyard’s in-house engineering department put its imprint on the project, too, via features we’ve seen on prior deliveries. What those features are, however, remain confidential.

Regardless, in terms of length overall, the megayacht is three feet (one meter) smaller than the largest-ever delivery in the shipyard’s history. That record belongs to Chopi Chopi, delivered in 2013. For further perspective, a more recent delivery, Cloud 9, is 243 feet (74 meters). On a related note, the Italian builder has made it known that it plans to pursue mega-size megayachts, to 295 feet (90 meters).

Interestingly, CRN has shown plans for a larger yacht nearly that size. However, the yacht is still in the concept stage. She’s a 282-footer (86-meter), featuring design by Harrison Eidsgaard.